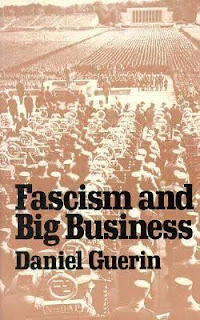 The recent film “The Downfall” caused an interesting response from some reviewers. For so long, Hitler had been portrayed as a “monster” or the epitome of “evil”, that to see a film which portrayed the reality of his last days – with him talking, smiling and discussing the war, was unbelievable.

Surely Hitler was a foaming at the mouth madman, whose every word caused the impressionable German people to become Zombies, unable to think for themselves?

What caused this confusion was a misunderstanding amongst the reviewers about the nature of fascism, and the society it created. Daniel Guerin’s classic analysis of Fascism was first published before the war had ended. It looks at the rise of Fascism in both Germany and Italy, analysing the similarities and looking for clues to it’s real nature.

Firstly Guerin has to explain how both the Italian and German fascists conned people into supporting them, but also gathered the support of the big wheels of capitalism, themselves terrified of the consequences of economic devastation and working class revolution.

Fascism offered everything to everyone. To the peasants and small farmers it offered land and an end to the burden of taxes. To the small businessmen and shopkeepers it offered stability and better prices. To the working men it offered jobs and a stable economy. To big business it guaranteed profits and the end of the “class struggle”.

To get the support of the lower classes it had to appear to be challenging the existing status-quo, that is why the speeches of Hitler and Mussolini in the early years of their careers are peppered with promises to end the tyranny of capitalism. But at the same time they promised to make the world even better for the masters of big business.

Guerin shows how once in power, Fascism immediately turns it’s back on the workers, peasants and small business men. Destroying jobs, smashing unions, breaking agreements and giving concessions and tax breaks to large land owners and big businesses. There are some incredible statistics to show just how much wages fell. While it is true that unemployment collapsed, this is partly do to whole sections of workers becoming ineligible for work. But it is also because the regimes started huge building projects (roads, railways etc) to create work, employing people on pittance wages and because of the expansion of the arms industry in both Italy and Germany.

It’s might be surprising to someone whose sole knowledge of Nazi Germany is the holocaust and the massacre of some 10 million people in concentration camps, that Guerin spends little time mentioning this side to the regimes. But this is because Guerin is partly looking at one aspect of those regimes, and partly because he is trying to explain the fundamental nature of Fascism – that it is a ideology directed at stabilising capitalism, using the adherence of large sections of the middle class population to get it’s support. It wins that adherence through racism – towards Jews in the case of 1930s Germany.

This is much clearer in Italy, where the stronger working-class movement and the Capitalist fear of revolution in the early 1920s meant that Fascism was much more explicitly anti-working class, only taking up the mantel of racism much later on.

Guerin’s work is a superb introduction to these regimes. It’s difficult to read at times – there is lots of empirical evidence to plough through, but it’s worth the effort to uncover a frequently ignored aspect to Hitler and Mussolini’s regimes.