Norah Carlin - The Causes of the English Civil War 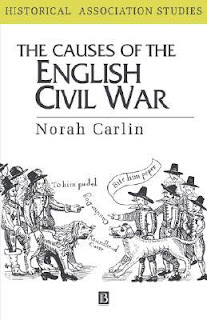 The plural "causes" in the title of Norah Carlin's book is important because as she makes clear she is not looking for a single cause. Indeed, as she points out, most historians "see it as their duty to establish a hierarchy of causes and to explain if relevant the relationship of one cause to another".

Instead Carlin paints a picture of a gradually changing society, sections of which are increasingly coming into conflict with the established order. There's the rise in trade, and the growth of capitalist relations in the countryside, but despite the importance of this to the economy, it was "rare" for merchants to rise to the peerage leading to their interests being sidelined in national politics. Simultaneously there was a growth in popular protest, and as Brian Manning has argued "mounting disorder due to the intensification of social conflicts". Carlin notes though, that this is controversial, but it was believed by many observers at the time which was "an important factor in the political choices they made in 1640-2".

Whether or not "disorder" was substantial, Carlin does argue that the period in the run up to the Civil War saw a growth in what we might now call political campaigning amon "layers of the population not normally involved in political activity". One petition from Essex received 30,000 names or marks. These petitions tended to congratulation Parliament, urge the avoidance of war and warn the king that his actions were leading to conflict.


English Puritanism can, moreover, be regarded as radical in its promotion of social and political activist, or positive intervention by even humble individuals in the hope of improving things or resisting evil... The radicalism of Puritanism would seem to lie... not in its autonomous 'religious'' characteristics... but in its function as a shared language or culture of activism and reform in the community.

These factors were encouraged by the changing economic and social situation in England. The growth of capitalist relations and the desire by those who made their wealth from trade to have their voices heard and a say in national politics led to a fissure in society that could only result in social conflict.


Changes in English society therefore made not only civil war, but the possibility of an independent political order without the king and even without the nobility, sustainable in a way which would have been unimaginable a hundred years before... The 'middling sort' of seventeenth-century England were prepared to sign political petitions, attend meetings and demonstrations and ultimately to arm for one side or the other (or even against both) in the English civil war because they had become accustomed to regarding themselves as participants in government rather than the dependents of feudal overlords.

The Civil War that erupted was thus an outgrowth of all the different changes in society coupled with a growing confidence by a section of society to actively engage in political action. Thus when Parliament was unable to militarily defeat the King, it required the bringing together of the desire for political change with those prepared to fight for it. Thus Cromwell's "Russet coated gentleman" who knew what he fought for, became the battering ram to smash the old order.

Norah Carlin's book is an excellent intro both to the causes of the English Civil War and to the wider historical debates that have taken place almost since the war began.

Manning - Aristocrats, Plebians and Revolution in England 1640-1660
Purkiss - The English Civil War: A People's History
Stone - The Causes of the English Revolution 1529-1642
Posted by Resolute Reader at 6:57 pm