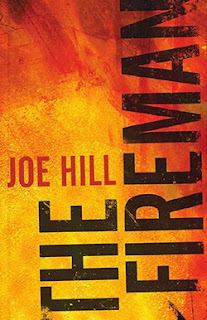 The Fireman tells the reader little about what is taking place in the wide world. There is little about the fall of governments or the failures of technological systems except for the most tantalising of snippets. After all we do all like to imagine what the end of civilisation is like. Rather like another recent piece of apocalyptic fiction, Station 11, Joe Hill's novel focuses on the lives of a few individuals, how they survive and their personal relationships. Some of these come from before the apocalypse, but The Fireman tends to keep the post plague world rather more self contained than Station 11.

The Fireman's world ends with disease, as a plague of Dragonscale effects individuals leading them to spontaneously combust. The shock of the combustion can lead to chain reactions and eventually large areas of the world are aflame.

Reading, and enjoying The Fireman is a little dependent on suspending one's belief in the laws of thermodynamics. There is also a, perhaps unintentional, metaphor for global warming here. One that has a particularly amusing moment as Dragonscale denier and right-wing presenter Glen Beck bursts into flame and dies live on TV. Joe Hill's disaster zone is a frighteningly contemporary one. His heroes compare events to 9/11 and JK Rowling is shot by firing squad for refusing to give in to a particularly nasty right-wing religious regime that comes to power in Britain.

But the centre piece of the novel is how the hero, Harper, comes to an isolated community of fellow Dragonscale suffers who have learnt to control, and indeed, thrive on the flames produced by the Dragonscale. Hunted by vigilantes and authorities (though the difference is often unclear), Harper has to survive the reality of a small group under enormous tension in the face of the collapse of social order. The big question here, of how people who are victims of such a plague survive in the atmosphere of terror that results, has many tragic resonances with today as refugees and migrants are scapegoated around the globe.

The Fireman is a page-turner, in part because of its unique story. But I was disappointed by the ending and at times I thought Joe Hill was trying too hard to highlight the parallels with modern society (let's all hope the references to Trump date very quickly). Comparing it to similar stories, such as Stephen King's The Stand, I wondered whether it will stand the test of time quite as well. Nonetheless its a unusual addition to the genre that will keep the reader glued till the end.