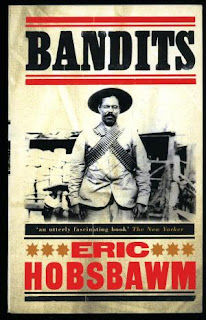 Who is the bandit? Where do they come from and how do they survive? These are the questions that Eric Hobsbawm's classic work Bandits sets out to explore. Rather then seeing bandits as revolutionaries, Hobsbawm sees bandits as those who are trying to solve problems inherent in the unpredictable life of the peasantry.


En. masse, they are little more than symptoms of crisis and tension in their society - of famine, pestilence, war or anything else that disrupts it. Banditry is therefore not a programme for peasant society but a form of self-help to escape it in particular circumstances... Bandits... have no ideas other than those of the peasantry... of which they form a part.

Rarely do bandits have a political strategy, or a revolutionary programme. Insofar as they do have a vision, it is "the defence or restoration of the traditional order of things 'as it should be'." (Revolutionary traditionalists as Hobsbawm describes them). Because this may well be a mythical past, this can of course inspire others. Thus bandits individually or collectively can be part of organising to both help others (the redistribution of wealth like Robin Hood for instance). But they can also become symptomatic, or play leading roles, in wider social movements. But even when bandits take on more politically active roles, such as the case of the Spanish bandit Sabate, who during the era of Franco held up bars to play anti-Franco songs, or fired leaflets from cannon into football crowds, you get a sense of spectacle for the sake of it, rather than real attempts to lead and organise.

Bandits are part and parcel of the communities they come from. But they are also an "outsider and a rebel, a poor man who refuses to accept the normal role of poverty, and establishes his freedom by means of the only resource within reach of the poor, strength, bravery, cunning and determination". It's this that can turn the bandit into hero, that can ensure that poems, songs and stories live on, long after the usually short lives of the bandits themselves. They inspire the peasant in the face of a world that offers only hard work and poverty, and little way out.

While an interesting read, there are places were this book feels very much the product of its 1969 publishing date. One such passage is when Hobsbawm discusses Sabate, writing that "just as there are some women who are only fully themselves in bed, so there are men who only realize themselves in action". Such sexism will shock the modern reader, and devalues the rest of this informative study.
Posted by Resolute Reader at 5:20 pm