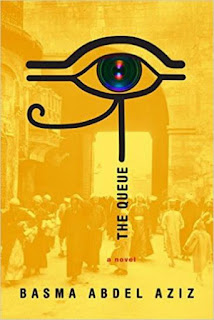 This is one of the most extraordinary novels that I have read in many years. It is being favourably compared to Orwell's 1984 or Kafka's The Trial. Certainly there are many similarities with these works that depict the difficulties faced by individuals confronted by brutal authoritarian rule and faceless bureaucracy. But to simply see this novel as being a Kafkaesque nightmare of bureaucracy gone mad is, in my opinion, too miss its essential context. This is, of course, the Egyptian Revolution.

First published in 2013 and only recently translated here, the book fits the period after Mubarak had been overthrown and anticipates the fall of Morsi and the rise of el-Sisi. As such we get a novel depicting the country in a state of political and economic uncertainty, easily exploited by the new order.

Set in a nameless Middle Eastern country in the aftermath of the "Disgraceful Events" when protests and riots against the country's dictatorship were brutally suppressed. Immediately after these "events", a new, faceless authority "The Gate" appears and from it an endless stream of commands, decrees and laws are made. At first these seem relatively benign, but as the Gate imposes its will it becomes harder and harder to function without the right paperwork.

Then the Gate closes. And the story centres on those who end up queueing outside waiting for the Gate to open. In particular we follow those trying to help their friend, Yehya, who was injured during the Disgraceful Events, and who has a bullet lodged inside him. His friends struggle to get help from the doctors, who are themselves trapped by rules that prevent them assisting. The bureaucracy clamps down harder and harder, statements follow statements. "Bullets were used by the protesters, not the security forces" the Gate declares. "Bullets were not used at all", "Foreigners are to blame", "There was no Disgraceful Event".

Various characters in the Queue represent different forces in the Revolution. There's the religious activist, convinced that only a strict adherence to religion will prevent social decay. There's young women who are fighting sexism and harassment and trying to organise against the state, and there is a man who truly believes his cousin who died in the security forces was actually a hero. There's even a brilliant little discussion about the role of social media as an organising tool.

But behind all this is the imposing monolith of The Gate. As a metaphor for an authoritarian state it's perfect. But the brilliance of this novel isn't this idea alone, nor the depiction of the un-moving queue of increasingly desperate people waiting outside - though the descriptions of the interactions in the queue are wonderful. What is fantastic in the way the author shows how the authoritarian state serves only its interests, and how this destroys some people's illusions, makes some people give up hope and forces others to try and fight back.
Posted by Resolute Reader at 9:05 pm