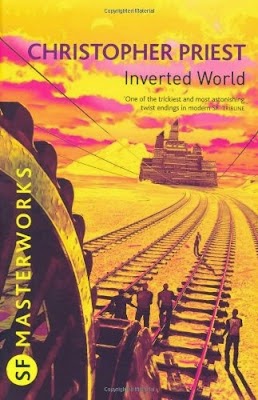 I am very surprised that it has taken me this long to discover and read this truly unusual science fiction novel. Perhaps this is because I read the original short-story back in New Writings in SF number 22 (Yeah, I'm sure you all have it on your shelves too) and subconsciously crossed it off the list. What ever the reason I'm glad I discovered it, because it opens up a whole new authors works to me.

Inverted World is based around a single city known as Earth. The city moves forward, towards an 'optimum'. Its movement isn't constant because it must navigate around mountains and across rivers. The city's workers must also constantly lay tracks in front of the city, removing them as the city crosses. This idea of a constantly moving city is not uncommon in science fiction. Both China Mieville and Iain M. Banks played with the idea. The difference in Priests' excellent world is the political and economic structure that forms the real basis to the story. In particular the city's guild system into which the inhabitants fit, and which serves to keep the city working, moving and functioning.

The guilds maintain order but they also maintain secrecy. Only a few of the city's inhabitants understand why the city must keep moving, or the reality of what is outside. Explaining that would ruin the story, and indeed the excellent ending. Though it is worth noting that the world that Christopher Priest has created is unique and very clever. But what makes the novel is what happens as the guild system begins to break down. The reasons for this are complex, but the question of population crisis, food and resource shortages and the role of the city in the wider role all play their part. Priest's novel is also unusual for 70s science fiction in having some excellent strong female roles. The ending is also very well done, though those who have read the original short story (all seven of you) should note that it is very different, and the novel is infinitely improved in style, characters and editing. If you like SF and you like a clever idea (and you also like urban rebellion against authority, for that too plays a key role) then read Inverted World.
Posted by Resolute Reader at 11:55 am

I would never consider a city to be mobile, let alone that mobile cities were a trope of SF! How very odd..