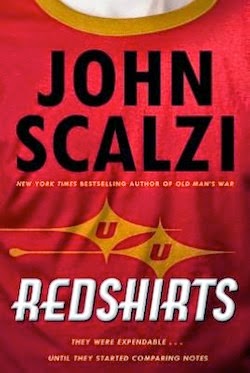 A few years ago someone produced a red t-shirt in the style of a star trek uniform, the word expendable written across the chest. The running joke about the life expectancy of a "redshirt" on an away team mission with Star Trek's stars is an old one. John Scalzi has turned it into a wonderfully comic novel that is far more than this single joke. There are plenty of nods towards those who know their Star Trek, in-jokes abound, but this novel is far more than that.

The story centres on a group of new arrivals on the star-ship Intrepid whose mission is to explore the galaxy. Quickly they realise that there is something strange going on, and as the older hands vanish everytime the captain comes looking for people to join them on a mission planet-side, the gradually realise that the Intrepid has one the highest casualty rates of any spaceship in history. Eventually they come to understand that they are characters in a television piece and concoct their own mission to sort things out. Now if that was all there was to the novel, it would still be an entertaining read. But in three codas to the book, John Scalzi explores further the consequences of a group of fictional characters becoming real. These fictional explorations of the nature of fiction, characters, life and love, turn a comic novel into a science fiction classic. One that deserves to be read far more widely than those who love Star Trek.

Cline - Ready Player One
Posted by Resolute Reader at 10:59 am

I think I enjoyed the three codas more than the actual novel, to be honest.