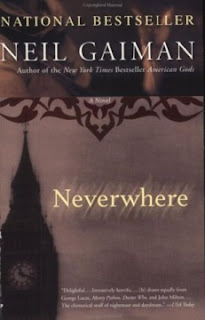 Rather like his later novel American Gods, Neil Gaiman's Neverwhere deals with the seedier underbelly of modern society. Fantastic parallel worlds mark both stories - the reality of Gods in the first, living hidden from human view amongst us is similar in many respects to the alternate world that exists beneath the major cities of human civilisation in the second novel.

Neverwhere is set in both Londons. The one we all know, populated by bankers and workers, commuters and schoolchildren is London Above. Here, our reluctant hero Richard Mayhew lives as a fairly successful, if unexciting banker. His fiance is possibly one of the most annoying people in London, yet Richard's engagement to her is part of a seemingly unstoppable treadmill. He will marry her, they'll have children, he'll get promoted and eventually his life will end.

The other London is one that Richard strays into because he takes the time to care for a stranger. Someone who looks dirty and dangerous, someone to ignore and move on. The fact that Richard stops and helps Door while his fiancee continues to her business dinner marks out their diffrences.

From this Richard enters a new fantastic reality - London Below. Here are the forgotten people. The people who sit hungry on street corners, the people who die forgotten and unwanted. The people who live on the edges of society. The homeless, the penniless, the mad. Invisible to London Above, their magical lives have not brought them freedom from the cares of the human world. But they may have a purpose Below.

This other London feels astonishingly familiar. Who hasn't wondered who the Black Frairs were, or which aristocrat sat in Earl's Court? The Shepherds of the Bush are to be feared and forgotten tube stations like British Museum are entries into other worlds. The dirt and squalor, the exagerated violence and the pain of London Below mirrors our own world. Money means nothing here, exchange, barter and personal debts mean everything.

Richard embarks on a quest with the Lady Door. He has rescued her, but lost and scared in this half familiar world he needs her as she needed him. Their quest brings them into contact with the weird and violent. Their bodyguard Hunter, for instance, who killed the Bear beneath Berlin and others is a particularly well drawn character.

This earlier work of Gaiman's is not as fully rounded as American Gods, though it is still a work of brilliance. The idea of a hidden, parallel world to great cities is not particularly new, but the genius here is that it is both strange and familiar. When Richard leaves the London Above for the strangeness of Below, we feel perhaps, the precarious nature of our own existence. Its a powerful metaphor for a world where economic crisis could easily bring unemployment, hunger and homelessness to so many, used to the trappings of London Above.