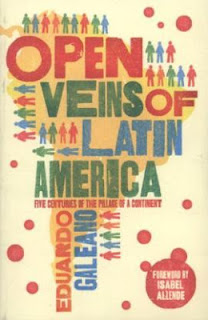 Eduardo Galeano's classic history of Latin America, is not a cheerful book. Its subtitle, "five centuries of the pillage of a continent" sums up the general historical approach of the author. Written in the early 1970s, the book has never been more relevant, as many of the general themes that Galeano identifies occurring forty years ago have their similarities today. In Galeano's words, those who argue that Imperialism no longer has an interest in Latin America "forget that a legion of pirates, merchants, bankers, Marines, technocrats, Green Berets, ambassadors and captains of industry have, in a long black page of history, taken over the life and destiny of the most of the people's of the south."

Galeano begins his story with the pillage that began almost as soon as Christopher Columbus trod on the soil of the West Indies. The glitter of gold on the necklaces of the natives, triggered a gold lust that led to a tsunami of exploration and colonisation. With this, as Christopher Mann's recent book 1493 has demonstrated, came the diseases that destroyed millions of indigenous peoples. Columbus brought, on his second voyage, some of the plants that would further shape the destiny of the continent. Food for the slaves of future plantations, cash crops and fuel for export industries. While Galeano's book is a story of people, it is rooted very much in the exploitation of Latin America's natural resources, wood, silver, gold, oil and so on.

Early European capitalism drew strength and wealth for its nascent factories and machinery from the exploitation of Latin America. The blood and sweat of millions of slaves extracted yet further wealth from the continent, concentrating it in England, Spain and elsewhere. Before African slaves arrived in South America, Galeano points out that tens of thousands of indigenous people had been forced to work the silver mines of Potosi in Bolivia. Helping to enrich the kings and queens of Europe, and their merchants. The poverty, brutality and racism that helped fuel this slavery was to be repeated on a larger scale very soon.

The Latin American colonies never had a chance. Galeano demonstrates how, from their earliest days, they were places to enrich colonial capitals. The arrival of capitalism in its modern form, simply deepened and extended the project. In simple terms he points out, that while Brazil might export Volkswagen's to Africa, America and the rest of Latin America, the profits went to German capitalism. What Brazil represented to VW Was low wages and unorganised workers. Galeano doesn't make the mistake of arguing that the populations of the wider world benefited from this unequal relationship. He understands that the wealth of Latin America was used to enrich a tiny minority, a system and a few large companies. If anything, the under-development of Latin America meant the further shackling of workers in Europe and America to the capitalist system.

The book celebrates the resistance as well. Latin America has always been characterised by people refusing to accept their lot. From slave revolts to land occupations, revolutions and the mass strikes of modern times, Galeano documents the men and women who've fought back. Though he also points out how they were frequently victims of Colonial power. By the time of writing, Galeano was having to point out the way that America, which had eclipsed Spanish and British influence in the region, was using its Marines to protect its interests. Within a few years of this book being first published, Pinochet was, with the assistance of the CIA able to ensure that any attempts to democratise and change the economy in the interest of ordinary Latin Americans would not succeed.

The vast resources of Latin America continue to be of interest to the more powerful economies. As indicated earlier, one of these is the huge populations. At the time of US independence, Brazil had the same population as the whole of America. Yet it was locked into an unequal relationship with its British governors who ensured the surplus value from that population ended up in London banks. Like an unscrupulous loan-shark, European powers and North American banks loaned money to Latin America. Much of it never reached the countries it was intended for, nor built the factories and infrastructure it was supposed to. By the middle of the nineteenth century, Galeano points out, 40% of Brazil's foreign budget was swallowed by foreign debt.

"Railroads formed another decisive part of the cage of dependency: when monopoly capitalism was in flower, imperialist influence extended into the colonial economies' remote backyards. Most of the loans were for financing railroads to bring minerals and foodstuffs to export terminals. The tracks were laid not to connect internal areas one with another but to connect production centres with ports."

The infrastructure of Latin America was thus built in the image, and the interests of foreign capital. When the minerals ran out, so did the investors. Galeano's central theme then, is the way that capitalism under-developed Latin America. The consequences remain today:

"Latin America was born as a single territory in the imaginations and hopes of Simon Bolivar, Jose Artigas and Jose de San Martin, but was broken in advance by the basic deformations of the colonial system."

By the 1970s, Galeano points out, it was cheaper and faster for Brazil to ship goods to Mexico via American or European ports. Telegrams sent between Buenos Aires and Lima had to travel via New York. Latin America was stunted by its own history.

Since it was written, much has occurred in Latin America, little of it has changed this basic analysis. Mass movements and revolution have threatened the domination of the United States. This took place in Chile and Nicaragua in the 1970s and 1980s. More recently it continues with the election of radical and leftist governments in the 1990s and 2000s. Some of those governments have failed the hopes of the mass movements that pushed them into parliament. Others continue to be a thorn in the side of Imperialism. What happens next, will as Galeano wrote in the end of the first edition of this book very much depend on "the hands of the dispossessed, the humiliated, the accursed."


"The Latin American cause is above all a social cause: the rebirth of Latin America must start with the overthrow of its masters, country by country. We are entering times of rebellion and change. There are those that believe that destiny rests on the knees of the gods; but the truth is that it confronts the conscience of man with a burning challenge."

Galeano - Children of the Days

Mann - 1493: How Europe's Discovery of the Americas Revolutionized Trade, Ecology and Life on Earth

Sader & Silverstein - Without Fear of Being Happy: Lula, the Workers Party and Brazil