Stephen King - Under the Dome 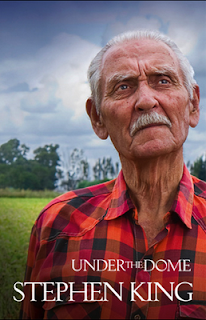 Stephen King's recent novel, Under the Dome, is a fairly monumental piece of work. At well over 800 pages, it is a hefty book to read, though an excellent one for long haul journeys. In the afterword, we're told that it was begun several times in the 1970s, and only finally finished in 2009. I'm sure that is true, but fans of King will recognise a number of themes, and I found it very similar to an early King work, The Tommy Knockers. This is not to turn potential readers away. Under the Dome is a great novel, that is King at his best.

One of the reasons for this, is his great writing. This is a novel in its truest sense, one that drags the reader along, allowing for late nights as you desperately try to find out what happens to one or other of the dozens of main characters.

But more importantly, the themes of this novel are really quite special.

Under the Dome is set in the tiny town of Chester's Mile. One day, rather dramatically, an invisible dome shuts the town off from outside. It is sudden enough for cars and lorries to impact at high speed. Birds die, breaking their necks against the invisible barrier.

All this might be the plot of a bad B-movie, and King plays that element up. What happens next though, is a vision of the dirty underbelly of American society, given free rein.

Key authority figures in the town's administration and police force are looked to for salvation. But these figures themselves are mired in corruption and wrong-doing. The appearance of the dome threatens to expose this, and through a combination of individual madness, and the logically consequences of authority figures trying to cover up crimes by commiting further crimes, the situation un-folds. Add into this mix the physical changes caused by the dome. The air is getting worse, and water is short. Power runs out, as the town relies on internal Propane for energy, rather than the regional grid. Propane is in short supply as its been a key part of the leading selectmen's self-improvement schemes. One of King's great themes, is the way that authority figures break down. Here it is taken to extremes as the police force becomes little more than the extension of the interests of key individuals. Armed bodies of men, acting in an isolated community, believing they are protecting the status quo from a wider chaos, is a fine metaphor for fascism. King makes it both believable and horrific.

In other King novels, that dwell on the chaos and madness that lies just beneath human society, supernatural elements play their role. Under the Dome relies less on this, and more on some general trends in society being distorted under extremely unusual circumstances. The dome itself, allows the US media to engage in a real life reality show. The world can see in, but no one can affect what is happening inside. There is no "voting off" here.

Cleverly, and not unlike his novel Needful Things (though this is far better written), King weaves together the tales of individual characters, building up to a dramatic climax. While this is standard fair for novels and SF, King's oblique critique of the world makes it special. Some of the metaphors are obvious (the worsening air as pollution is trapped in the dome is an obvious stand in for climate change), others less so. I was particularly struck by the way that Veteran's experiences of Iraq are now part of the discourse in fantasy novels, and form a key plot point.

Fans of Stephen King will enjoy this work. Those new to his work can do far worse than begin here, with a clever and well written commentary on the realities of life in small town America.

Posted by Resolute Reader at 12:53 am