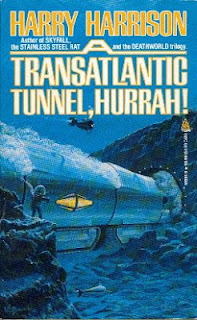 Harry Harrison's novel A Transatlantic Tunnel Hurrah! (also known as Tunnel Through the Deeps) is a forgotten classic of steampunk alternate history. In this reality, history diverged from our own timeline around the time the Moors occupied Spain. This leads to a number of major differences in Europe (Spain and Portugal don't exist for instance). But the most important piece of this alternate history for our story, is that the American Revolution failed, and George Washington was shot as a traitor.

As a result, the United States remains part of the British Empire, though other bits are breaking away. The US is a smaller group of states, and economically in hoc to Britain. The great victorian engineer, Brunel is in the process of slowly building a transatlantic tunnel that will link this major colony with the motherland. But his drilling will take hundreds of years, and funding for the American end is short.

The hero of the tale, Captain "Gus" Washington, is a direct descendent of the traitor Washington. A brilliant engineer, his ideas and enthusiasm clash with Brunel. He determines to drive the American end of the tunnel forward faster, with new technologies, ideas and funding. The race to finish the tunnel becomes a a race between the old of the British Empire and the new of a strengthening US capitalism.

This is steampunk, so coal powered aircraft and rocket mail is mixed with atomic trains and the odd lack of the internal combustion engine. The strict hierachical society of Victorian England remains, though at its apex is the current Queen and Prince Phillip. First published in 1972 there are enough knowing nods towards the modern world to make this an amusing tale, and Harrison plays it very much for laughs. There is an obligatory race scene, that really ought to be form the centrepiece of a movie adaption, a love interest and a whole collection of pompous Victorian businessmen.

A forgotten classic of science fiction that deserves a new steampunk audience.