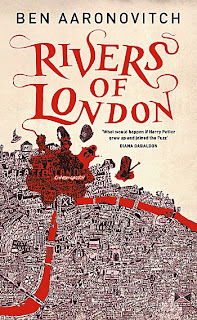 The idea that there is an alternative, hidden, secret London just out of sight of the tourist filled streets is not a new one. In fact, the throngs of people lining the streets, bedraggled in Jubilee bunting this weekend are partaking in the most superficial level of London's strata of reality.

Ben Aaronovitch is not the first to use this metaphor in fantasy fiction. Neil Gaiman's book Neverwhere is a superb example of the genre. Aaronovitch though uses the medium of the Metropolitan Police to explore this alternate world of magic and fantastical powers.

Aaronovitch has some interesting ideas. The personification of the rivers is nice, the ladies who represent the lost London rivers forming a alternate powerbase to Old Man Thames and his sons upstream, for instance. But much of this feels superficial and, indeed the story structure feels borrowed. Our hero, Peter Grant, a lowly police constable destined for a life trapped in the lower echelons of the force's bureacracy, sees a ghost and thus begins his encounter with a secret wing of the Met. It's wizard. Like many other muggles beginning their encounter with the world of magic, he stumbles through various encounters, each more fantastical than the last, until the reader themselves discovers this new world. Neil Gaiman did it far better, J K Rowling did it with far greater numbers of words.

Aaronovitch writes for a London audience. He's keen to name drop the various cafes and bars that he and his friends clearly frequent, and anyone who has lived in the capital for long will find themselves following the streets in their minds eye. He's also keen to make it clear that he is writing about the progressive "post Macpherson" force. Our "mixed race" hero, experiences no racism, except for allusions to how it was, and women are scattered liberally through all ranks of the force.

The Met itself is a metaphor for stability and consistency through hundreds of years of riot and apparent chaos. Aaronovitch makes much of the long tradition of the force, with only a half joking reference to the them keeping down the working classes. Ironically, the centre-piece riot of middle-class theatre goers only serves to underline the unreal nature of the story. A great story-teller should be able to make the fantastical seem believable. Aaronovitch hasn't got the writing ability to do this well, and using the Metropolitan Police as a vehicle of stability and sanity in a world of chaos will raise an eyebrow from anyone whose experience of London is several layers below the pomp and circumstance of the flag waving Jubilee idiots.

Gaiman - Neverwhere
Collins - London Belongs to Me
Posted by Resolute Reader at 12:22 pm

By the way, the thing that really pissed me off about "Rivers of London" was Aaronovitch's equating of Captain Swing, Wat Tyler and Oswald Mosley.

This sounds right up my street (pun intended!) as a Gaiman fan and resident of London.
And yes, you're right, the 'underbelly' of London is ripe for the picking in this way - the old streets and secret underground passageways (old disused tube lines and stations, war bunkers, etc.) add an air of reality to any fantasy.
I shall seek this out.
Just one question - would you say this is young adult fiction?