Claire North - The End of the Day 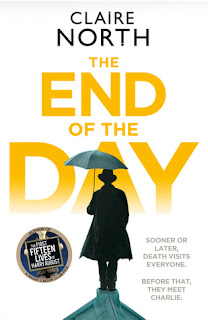 Claire North's first two books focused on individuals with odd powers. The First Fifteen Lives of Harry August was about people who returned to the beginning of their lives with their memories intact upon their death. Touch was about people who could possess other peoples bodies at will. This book however is very different, it's about Charlie, who is employed by Death as her harbinger. Charlie has no special abilities except perhaps, a faith in individuals (which is greatly tested by some of the people he visits) and being good at listening, which is particularly useful as people tend to pour out their thoughts to him.

The plot is fairly thin, but the book is extremely readable. It's as much a comment on the state of the world, as on the lives of the people Charlie meets. Chapters are interspersed by random snippets of conversation which betray both the happiness and sadness of people's lives and their rage at the world around them. War, Famine and Pestilence, as well as their respective harbingers, stalk the land and North depicts how their abilities have changed with the modern world, but how the opportunities for disaster have spread. I was struck by the contemporary relevance of this in a small aside at the end as War looks at a small island in the South China Seas and the captain of the ship comments how "they" have put their flag on it. Its never mentioned who they are, but War is suitably pleased at what this means.

As Charlie travels the world meeting people and giving gifts the reader is often left wondering what happens next. Charlie is at pains to explain that his visit doesn't mean death is imminent, and his gifts often help the recipient live longer. This is a bureaucratic process run by a expertly staffed office in Milton Keynes (having visited the place I'm not surprised that Death's office is there), and when Charlie finds himself in difficult situations, he is helped out by the bureaucracy. Though his activities attract the attention of the authorities who like many, want to bargain with Death itself.

Oddly the thing that worked least for me, is that Death, and his harbinger, are simply accepted by so many people. The news reports on him occasionally; people are often completely unsurprised by his presence, or existence and crucially, the authorities track him.

At the end of the book what I remembered most was the anger. North's characters are angry at racism and poverty (there's an interesting scene with a Black Lives Matter demo); war and climate change are constant backdrops. Imperialist destruction of South America and the Middle East are repeatedly mentioned and the way that the profits come before people is behind some of the key scenes of the book. The first time that Charlie is caught on camera, for instance, is when he visits a family being forced out of their London home by a company that wants to build luxury apartments.

The End of the Day is not as good a novel as North's earlier books - the central idea just didn't quite work for me this time. But in turns tragic and funny, it is a book that made me think, which is no bad thing at all. It also contains a highly appropriate quote from Karl Marx if you can find it.