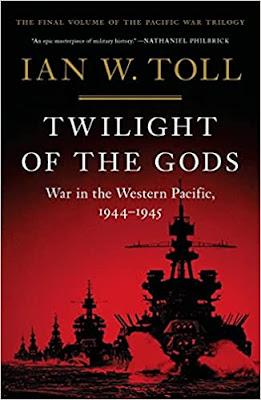 In the his author's note to this, the third volume of his trilogy on the Pacific War, Ian W. Toll apologies for the delay in delivering the book. He explains that "the war got very large in late 1944 and 1945, in every dimension" and he needed much extra time and space to complete the story. Those of us who have been waiting on Toll to finish the work should congratulate him for not rushing to an end. The result is an exceptional work of history about a complex, and very large, subject.

The great strength of all three of Toll's volumes is that they place the battle in the Pacific in a wider social, political and economic context. The first volume especially showed how the Japanese attack on Pearl Harbour came out of a combination of economic need, history and the nature of the Japanese regime. The second volume focusing as it does on the middle part of the war, following the US victory at Midway focuses to a much greater extent on the nature of that conflict. The start of the island hoping war, as the US gradually moved towards Japan, and the arguments among the US military leadership about the best way to prosecute the attack.

Volume three has a great deal of military history. At the heart of the book are the two enormous battles of Iwo Jima and Okinawa, as overwhelming US military superiority was brought to bear on well entrenched, committed and tactically astute Japanese forces. Toll is adept at describing these conflicts, alternating between a birds-eye overview of the battles, to reports from the ground. These two campaigns, perhaps some of the most bloody fighting of World War Two outside of the Eastern Front, are described without succumbing to glorification of either side, or warfare itself.

Despite Toll's fair coverage of the war on both sides, he does not avoid taking sides or pointing out mistakes. His account of the Battle of Leyte Gulf, the largest naval engagement in human history, makes it very clear that the US commander Admiral William Halsey made a series of tactical errors in the pursuit of his own personal agenda to lead a fleet in a crushing defeat of the enemy. It is hard not to read Toll's account without seeing Halsey as a glory seeker who should have been sacked, rather than celebrated. But, despite the space given to these important discussions, and the nail-biting account of the battle that took place which came close to being disastrous for the US, Toll never forgets the human cost. In typical style he sums up the experience for the reader by painting an emotional picture:

The seas around Leyte were littered with debris, the remnants of US and Japanese ships sunk in the great naval battle. Oil slicks polluted the beaches along Surigao Strait. Bodies, mostly Japanese, drifted with the tides and washed ashore. A Seventh Fleet officer noted that the entire area was choked with the 'odor of decaying flesh'. According to an American intelligence officer embedded with anti-Japanese guerrillas on Samar, much 'treasure' was found on the beaches in the days after the battle... Crates of rations floated ashore, containing crackers, cheese, jam, dehydrated potatoes, spam, cigarettes and coffee. Clothing and mattresses were salvaged by civilian Filipinos. A waterlogged paperback copy of Gone with the Wind was laid out... Drums of gasoline were carried away and stored... A headless body washed ashore, probably Japanese: it was cremated atop a pile of driftwood.

Here Toll gives us a sense of the mass economic superiority of the US forces that were able to defeat the Japanese and the human cost in individual lives.

But volume three is far more than military history, however personalised. The end of the war meant that questions of geo-politics became important once again. This obviously matters in two specific issues - the use of atomic bombs on Hiroshima and Nagasaki, and the post-war relations between Japan and the US. Even more interesting is that Toll is able to explain specifics of the end of the war, such as the use of suicide weapons and attacks by the Japanese, in the framework of his earlier discussions of Japanese society. Toll does not deploy any of the crude stereotypes (or racist language) that has been used by some historians to explain these attacks. But tries to show how they arose out of the ideology of the Japanese state - a highly hierarchical society whose population had been filled with racialised propaganda against Americans.

For instance Toll notes the differences between the airforce and navy when asked to launch suicide attacks. The somewhat strange behaviour of Japanese naval commanders at Leyte Gulf is thus explained by this difference:

The incubus of defeatism was spreading through their ranks. And how could it have been otherwise, when the ludicrously named 'Plan Victory' was itself a token of the regime's defeatism?

Not every soldier, sailor or commander was willing to commit suicide in desperate attacks to defend the homeland. Many were. But their decisions were the consequence of concrete circumstances. Toll's nuanced discussion of this puts many other historians to shame.

Toll doesn't fail to turn his eye on the US either. He describes the cynicism of troops towards official reporting of the war, and sometimes their cynicism towards much else - the groans and jeers that accompanied images of "Old Glory" unfurling on the movie screens. He notes the impact on the war boom at home, which "completed what the New Dealers had started - it lifted the fortunes of the poorest Americans, including blacks, Latinos and poor rural whites". Though Toll doesn't fail to record the racism and the inequality that also existed.

There are some omissions. I was surprised not to see mention of the Port Chicago explosion and mutiny by black servicemen, and I'd have liked to read more about the experience of black troops in the latter part of the campaign.

Finally though it is worth acknowledging Toll's discussion of the use of the atomic bomb. His account certainly does not ignore the human impact of the use of the attacks on Hiroshima and Nagasaki (nor for that matter the US firebombing of civilian targets). He draws, like many historians, on John Hersey's moving account for powerful accounts of civilians in Hiroshima. Toll avoids taking a position on whether the bomb should have been dropped - though he makes if clear that the decisions behind its use were not simply about how many US troops might be saved, as crude defenders of the decision like to make. He points out how the weapon fitted into longer term US strategies for a post-war world and the start of the Cold War. Of more interest is the detail with which Toll explores the Japanese government's politics in the last weeks of the war. The vying between dove and hawk factions, the ineffectual leadership of the Emperor, and the pro-war coup that very nearly transformed the situation in the aftermath of peace.

Ultimately though, this is the story of the most brutal of human conflicts. Toll places the combat, on land, in the air and on and under the sea, in the context of the economic, political and social forces that lead the Japanese and US government's into war. But he never forgets the human experience of that war, on both sides, in all its bloody detail. Ian W. Toll's book is a magnificent achievement and the whole trilogy comes highly recommended.

Posted by Resolute Reader at 6:16 pm