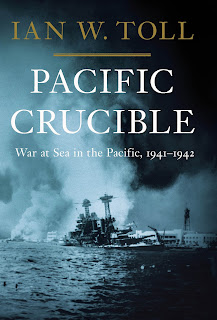 The Pacific theatre in World War Two was in every sense an imperialist conflict. Two emerging powers were vying for the region's resources and markets. An older colonial power, Britain, hung on with a self-confidence that belayed its complete lack of military preparedness.  Pacific Crucible is the story of the first year of that conflict. From Japan's brilliant and devastating attack on Pearl Harbor which sent shock-waves through the United States, to their defeat at the Battle of Midway - a victory that relied on a strong dose of luck and superb work by cryptographers, as well as enormous bravery.

Toll begins with an over-view of naval strategy. He notes that both the United States and Japan were stuck with a set of tactics that had been handed down to them from 19th century military doctrine. The concentration of naval power in large fleets that could knock out enemy forces in one huge battle. But by the 1930s this doctrine no longer fitted the situation. The role of aircraft and particularly carrier based aircraft was to transform the situation. Japan's victory at Pearl Harbor was the first indication of this, but it seems that even with this victory, Japan failed to learn the lessons and, as Midway showed, still focused on the role of their battleships.

In one revealing paragraph, Toll shows how the nature of the victory at Pearl Harbor actually encouraged this thinking for the United States, leaving the US with a smaller, faster fleet and more reliant on its carriers than ever before.

But where Toll really excels in is his understanding of how Japanese and American history shaped the conflict and how each country's leaderships' perception of each other affected their military actions. For instance, despite the rapid and deep deterioration in relationships in the run up to Pearl Harbor, the United States was completely unprepared for war. As the Japanese military machine rapidly rolled over US and British bases in a matter of weeks, it was clear that no-one expected this to happen. The Japanese were considered to be under-prepared militarily, with outdated equipment and small air-forces. Particularly for the US and the British, racist attitudes played a central role in this. Apologies for the racism quoted in the following paragraph but it's worth repeating to see how little the US understood about what was about to hit them.


In the years before the war, the Americans and British had taken comfort in a widely held conviction that Japanese air-power was not to be viewed seriously. That impression was nourished by quackish, pseudo-scientific theories proposed by 'experts' of various fields. The Japanese would always make bundling pilots, the authorities patiently explained, because they suffered from innate physiological defects. They were cross-eyed and nearsighted, possible a symptom of their 'slanted' eyes. As infants, they had been carried on the backs of their mothers, causing their heads to wobble in a way that thew off the balance in the inner ear. Japanese cultural norms emphasized conformity and obedience; therefore their young men must lack the aviator's traits of individualism and self-reliance.

This sort of racist nonsense led to the US and Britain being "hoist by their own petard", as far superior Japanese pilots, flying the wonderful Zero fighter repeatedly blew their opponents out of the sky. By contrast, the US was badly prepared. Its pilots inexperienced, it's gunners inaccurate and its technology laughable. I was struck by how often US torpedoes simply didn't work and while Toll doesn't tell the story, the failure is rooted in bureaucratic ineptitude and lack of preparedness for war.

Toll doesn't neglect the history of Japan, telling the story of the rise to power of a powerful, centralised military clique, that clearly bordered on fascism in terms of its nationalistic and expansionist tendencies. Mein Kampf edited to remove Hitlers' racism directed at Asians was a best-seller and the regime destroyed all opposition, left and liberal, shaping and preparing the population for war. The swift victories after Pearl Harbor strengthened the regime which was able to keep the vast majority of the population (and even the military) in the dark following defeats.

One thing that seems apparent is that Japan couldn't win an all out war. It probably came close to winning a negotiated settlement where they relinquished some territory in exchange for keeping other parts - a victory that would almost certainly have meant Britain, Holland and other European powers lost their Asian colonies. Had Japan won at Midway this may well have been a likely outcome.

While much of the book focuses on the war and its battles, Toll tells the story through detailed portraits of the principle leaders. This works well and we can see how the conflict is shaped by economic and political forces, but also how the attitudes of the individuals make a real difference. Admiral Yamamoto's decisions in the immediate aftermath of his loss of four carriers at Midway might have still changed the course of things in Japans favour. The competition and conflict between the US's two code-breaking teams nearly derailed their leadership in the run up to Midway.

Ian W. Toll's book is an excellent over-view.  Its also full of tiny detail that really illuminates the wider war. The word "Hawaii", for instance, was overprinted on all US bank notes on the island so that it could be declared invalid if Japan took the islands. A tiny detail that shows the US government really did think it might lose the islands completely. There are some strange omissions. Nothing is mentioned about the US men who were captured and then executed by the Japanese after Midway, and Ensign Gay one of the US pilots who was shot down and spent hours floating in the sea watching the Japanese defeat is left swimming there, without his rescue being mentioned.

Surprisingly, for a book that covers the US's political establishments response to the war, there is nothing here about the internment of Japanese-Americans and their appalling treatment during and after the war. Given Toll's evenhanded coverage of both sides of the war, this is an omission that is strange, but will perhaps be rectified in later volumes.

This is volume one of a three part history of the Pacific War, which the publishers say is the first in many decades. If the others are as insightful as this clear, detailed history, which avoids jingoism and doesn't fail to highlight the mistakes of military leaders and politicians, they will be well worth reading. Highly recommended.