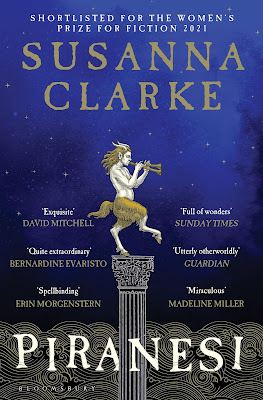 This is a short, unusual and compelling work by the author of the very successful Jonathan Strange & Mr Norrell. Piranesi opens with her titular character in the maze like House. Piranesi worships the House, a network of rooms, decorated with different statues and sometimes open to the elements. The maze-like structure is periodically flooded and contains numerous statues which Piranesi has woven into a mythical like explanation for the house and his role. He fills his time fishing for food, exploring and respectively looking after the skeletal remains of other individuals. He knows that the House experiences periodic floods from different times and can predict the height of tides accurately. Piranesi was an 18th Century Italian architect who drew multiple designs for imaginary, fantastical prisons - they give a sense of the purpose of the House - simultaneously a trap and an alternate, escapist reality. Though in my imagination the House is more like one of those old text adventures, each room discrete and decorated uniquely, with a few exits - N,S,E and Up or Down.

He also has at least one other companion, a friendly character who appears at regular intervals in different clothing. Piranesi holds this Other in high esteem - he is trying to understand the House but is unwilling to spend much time there, or travel far. On occasion the Other brings him gifts - new shoes for instance.

To the reader there is some clear overlap with our own world. The Other's gifts and outfits for instance. Piranesi also seems to have some knowledge of a time and place before the House, which helps him invent an explanation for what the House is. But the reader learns at the same time as Piranesi what is happening and what the House is.

The story is very compelling - I finished it almost in a single setting, as I rushed to the end to work out what was going on. The ending is remarkable and quite shocking, though Clarke gradually allows the real world to break through into the House (and Piranesi's) reality. Highly enjoyable, I think this will repay repeated readings.