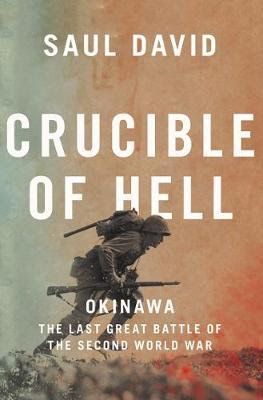 By chance, while reading the final part of Ian W. Toll's excellent trilogy on the Pacific War, Twilight of the Gods, I came across Saul David's latest book Crucible of Hell, which tells the story of the Battle for Okinawa. Okinawa was one of the bloodiest battles of World War Two, and because it is relatively less well known in Europe I was keen to find out more.

David tells the story from a multitude of viewpoints, relying heavily on eyewitness accounts of survivors on both sides. Given the focus on Okinawa there is, of course, far more detail than in Toll's book though the authors often use the same sources and on occasion the same quotes. David does well to get across the appalling cost of the war, and there is some more detail about specific events such as the death of General Buckner - the highest ranking US serviceman to lose their life in the war.

However the story felt superficial and David's treatment of the political and social context to the Japanese's stubborn refusal to surrender didn't do the subject justice. The final part of the book looks at the use of the atomic bombs on Hiroshima and Nagasaki, and here David is firmly in the camp of those who argue that Japan needed to experience these attacks in order to end the war without further US loss of life. David doesn't explore the more complex political dynamics taking place in the Japanese high command, which meant that surrender was much more likely than many believed.

While the book has much material of interest, it felt superficial and lacking in nuance. A big disappointment, particular reading immediately after Toll's work.

Posted by Resolute Reader at 4:30 pm