Richard Horton - The Covid-19 Catastrophe: What's gone wrong and how to stop it happening again 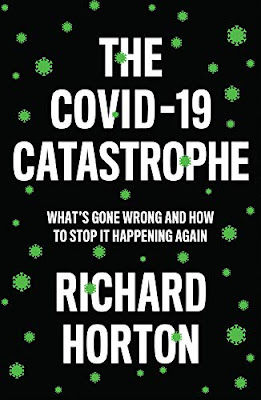 Richard Horton is the influential editor of The Lancet, perhaps the most important medical journal in the world. He has been a vocal commentator through the Covid-19 pandemic, a critical thorn in the side of the British government and an important source of news for the lay person. Despite the fact that we are still in the midst of the "catastrophe" of his book's title, what he has to say deserves a wide readership. There are lessons here for future pandemics, as well as guidance for what we should be doing to survive the one we are already in.

Horton begins with the origin story of Covid-19. Here he focuses less on the origins of the virus itself - that's a story that's told well in Andreas Malm's book that I recently reviewed. Instead he looks at how the disease was first identified and how it spread. Reading Horton's brief account of coronavirus' spread around the globe I realised I had forgotten how quickly events unfolded in early 2020. Within weeks the disease had gone from infecting a handful of people in a food market in Wuhan to full-on pandemic. Something even Trump acknowledged on March 17th.

But while we watched the events unfold on social media and websites that updated statistics in near real time, Horton explains how governments, particularly in the UK and the USA did little to prepare us. He highlights how the Chinese medical system was incredibly open with its information and knowledge - after a brief attempt by authorities to shutdown whistle-blowers. While the success of the Chinese in cautiously lifting lockdown after ten weeks led us to believe we'd have a similar short experience, in fact, there's no doubt that many politicians clearly believed that superior medical technology, better government and large multinational corporations would mean that we'd do better than the Chinese.

Horton is certainly no apologist for the Chinese state. He makes the point that the "Chinese government owes the world a more detailed explanation of what took place in Wuhan... We need to know so that we have the best chance of preventing it from happening again". But he also says:

Chinese scientists and health workers deserve our gratitude. I know from my own knowledge of these dedicated individuals that they worked tirelessly to understand the nature of this pandemic. They made it their duty to inform WHO when they were sure there was reason to signal global alarm. And, in my dealings with Chinese scientists and policymakers, I have observed nothing less than an extraordinary commitment to collaborate openly and unconditionally to defeat this disease.

Highlighting this is important. Donald Trump made great political play out of arguing exactly the opposite. In barely concealed racist language he blamed the Chinese, the WHO and anyone else he could for the disease. His rants covered up the fact that his administration was doing nothing.

While there was much to learn from China's experience, Trump and the British government failed to heed the lessons. But they also failed to learn from their own planning. In 2016 Exercise Cygnus modelled an influenza outbreak in the UK for the government,. One of the chief scientific advisors to the government commented that "we learnt what would help, but did not necessarily implement those lessons".

In fact the only concern of the British government seemed to be moving back to business as usual as soon as possible. As Horton points out:

In the UK, just three weeks into its lockdown, public debate was already focusing on an exit strategy. But, without either a vaccine to confer immunity or adequate capacity to test, trace and isolate contacts, the prospects for an early exist were nothing more than speculation mixed with touches of fantasy and delusion.

Writing this during Lockdown 2 we can attest to the singular failure of this strategy. Horton points to the confusion at the heart of British government:

As March [2020] proceeded, government ministers became increasingly anxious. But they were still unable to act decisively. Their staccato decision-making suggested an atmosphere of mounting confusion and fear. On 16 March the public was advised to cease non-essential travel. On 18 March schools were closed. And on 20 March, entertainment venues, bars and restaurants were shut. It took until 23 March for the 'stay at home' order to be issued. Critical time had been lost.

Tragically part of the problem were the scientific advisers. Horton says that "they too did too little, too late". He continues:

In the UK, the government had the services of some of the most talented researchers in the world on which to draw. But somehow there was a collective failure to recognise the signals that Chinese and Italian scientists were sending. The UK had the opportunity and the time to learn from the experience of other countries. For reasons that remain not entirely clear, the UK missed those signals and missed those opportunities.

I write this the day after the UK passed 50,000 Covid related deaths. Many (most?) of those should not have died. Horton might argue that the reasons are not entirely clear, but I suggest that many of the problems lie in part in the government's belief in the free market and its consequent hope that a vaccine would be found quickly. In passing it might be worth noting the close links between this approach and that of neoliberal governments seeking to respond to climate change. But the main reason is that Boris Johnson et al, were committed all the way through events to following the path that was most beneficial to business.

Horton cautions that we don't simply see Covid as a disease, but as something at the "meeting of biology and biography" a concept he attributes to the French sociologist Didier Fassin. It is worth remembering this. Pandemics are not simply experienced as illnesses, but are changed, multiplied and redirected according to the fractures and fissures of society - another parallel to climate change. Lockdowns, as Horton points out, haven't just been deployed to try and stop the spread of disease, but they've also led to mental health crises, increased domestic violence and child maltreatment. The UN estimates at least 15 million more cases of domestic violence as a result of lockdown so far.

But Covid also points to something else, an "opportunity to rethink the ethical basis of society". Capitalism, Horton notes has "weaknesses that contributed to the tragic toll of deaths". Might we "seize a moment to redefine our values...to our wellbeing over our wealth"? Its certainly a laudable hope. The Marxist in me would have to point out that doing this would mean a revolutionary challenge to capitalism itself, and I'm not sure that Horton is going that far yet.

Written in the midst of pandemic this short book packs a great deal of punch. It skewers the collective failures of governments and politicians and celebrates the frontline health workers and scientists who've sacrificed their energy and sometimes their lives, to trying to stop the disease. But it also shows that we live in a broken system that is unable to respond to disease. There are many lessons to be learnt from Covid-19 and Richard Horton's book is an extremely good place to start.

Posted by Resolute Reader at 9:48 pm