William Dalrymple - Return of a King: The Battle for Afghanistan 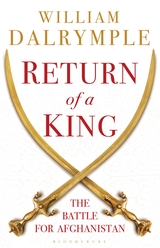 In 1839 a British Army of over 20,000 British and Indian troops invaded the area that we now call Afghanistan. Less than two years later they were so badly defeated that only one soldier made it back to safety. A handful of other English troops survived in captivity and a few hundreds of Indian troops made it home. Thousands of others were killed in the disastrous retreat from Kabul, sold into slavery or killed after being taken prisoner. This story of the First Afghan War is not completely forgotten, several excellent books have been written about it, in particular Patrick Macrory's Signal Catastrophe which I reviewed here. William Dalrymple's book is however important because it was written in a time when western troops were once again precariously based in Kabul, an occupation that, towards the end was becoming as unsustainable as that of 1842. The parallels that Dalrymple draws out are frightening, but what makes Dalrymple's book so interesting is that it is the first account of this war that draws heavily on nineteenth century Afghan sources.

Dalrymple spent some time in Afghanistan writing the book, and in his afterword describes visiting on of the historic sites and seeing an American patrol blown up by an IED. It is not surprising that the comparison between the two wars was at the forefront of his mind.

Dalrymple begins his history with a detailed account of the politics of Afghanistan. This is important, because the British invaded the country in order to impose their favoured monarch on the throne. Without understanding the complex relationships between different tribes and families in the country, it is difficult to comprehend just why the British got it so wrong with their choices. What Dalrymple also brings out though, is that the arrogance and internal rivalry of the British camp led them to ignore those British agents, such as Sekunder Burnes who did have a good grasp of the political situation. In making these mistakes, as with several others over the next few years, there is not a little bit of upper-class arrogance against those who have better knowledge but come from the lower orders.

Even before the invasion, many were suggesting it was doomed to failure. Mountstuart Elphinstone said, "if you send 27,000 men and can feed them, I have no doubt you will take Canahar and Cabul and set up Shuja [the monarch]... but for maintaining him in a poor, cold, strong and remote country, among a turbulent people like the Afghans, I own it seems to me hopeless."

So why did they do it. Then, as in 2001, the issue was geo-politics. In the late 1830s there was a real feel (though based on limited evidence) that Russia was likely to turn Afghanistan into a power-base that would threaten British interests in India. Even when Russia backed down from any interest in the country, the British still went ahead, stretching the local economy, their supply lines and their luck.

Almost as soon as the British had arrived in Kabul, they faced resistance. Dalrymple's descriptions portray it very much as a popular movement to get then occupiers out. This wasn't a few terrorists, but a popular rebellion, and quickly the British learned not to leave their heavily guarded camps.

The first acts of resistance to the British... Two officers of the 16th Lancers who had gone off fishing along the banks of the Arghandab were set upon by a crowd of Durranis as they made their way home; one was stabbed and later died.... Two hundred camp followers who attempted to make their way back to India 'were betrayed, disarmed and butchered to a man'.

But the nature of the occupation itself encouraged this resistance. Dalrymple documents a rape by a British soldier of a young girl, the lack of punishment in the face of the grieving relatives turned many against the occupation. Interestingly, the question of women was a big issue for the Afghan people. That the British effectively used the women of Kabul as prostitutes, taking wives and assaulting others was a great insult to the Muslim population. More importantly, that leading British officers like Burnes had numerous affairs with married women shocked the wider population, and led directly to him being the first victim of the uprising when it occurred. Dalrymple notes that contemporary Afghan sources make "consistent complaint" that the "British had no respect for women, raping and dishonouring wherever they went". 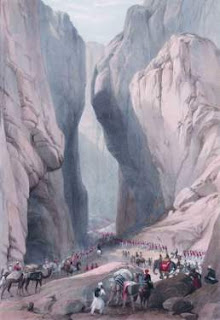 Nonetheless, the British could have probably consolidated their position had they no behaved in such an ill-judged and arrogant way. They appear to have had a belief in the superiority of British military might that bordered on madness. Building their military base in Kabul "overlooked by the fortifications of several Afghan  nobles", as one contemporary observer wrote, "it must always remain a wonder that any government, any officer, or set of officers, who had either science of experience in the field, should in a half conquered country fix their forces in so extraordinary and injudicious a position."

When the fighting started the British were trapped. In part this was military, their soldiers were picked off from a distance, from heavily protected Afghan snipers. In part through, it was through appalling levels of military mismanagement. The British officers seemed utterly unable to make decisive decisions. Lady Sale describes at one point how she and others watched as a British square stood isolated on a hillside, picked off one by one as the officer seemed unable to beat a retreat. One more example should suffice:

although the forts contained all the British food supplies that had been gathered for the long Afghan winter, neither Elphinstone nor Macnaughten sent any troops, or even further supplies of ammunition to aid the defenders of either outpost, although both centres of resistance were less than a mile and a half from the cantonment where 5,000 armed sepoys were idly waiting orders.

Bad leadership, cowardice and military stupidity dogged the army. Dalrymple points out that several of the first Indian regiments to mutiny in 1857 were the ones whose British officers had deserted them in 1842. More importantly, when the army did finally decide to retreat, it did so in such a disorganised and ill-managed way, that massacre was almost entirely inevitable.

The destruction of the British army led to the destruction of Kabul. Not being known for their subtlety the British sent the "Army of Retribution" to Kabul which massacred men, women and children all the way back to the capital. On their arrival, they destroyed the market, one of the architectural wonders of Asia and butchered the population who remained, despite them being some of the few who had some loyalty to the British.

The invasion cost more than 40,000 lives and ended the East India Company. It cost something like £50 billion in today's money, which pushed the Indian economy to the point of collapse. The Indian army was left damaged and "alienated", helping sow the seeds of future revolt and Afghanistan remained out of bounds to future British interests.

Both Macrory and William Dalrymple's books make the point that in the twentieth and twenty first centuries, the names of the British military leaders are better remembered by the Afghan people than by the British. In part this is because the Afghan population remember their victories, but it is also because the First Afghan War highlighted the appalling realities of British Imperial rule. It demonstrated that the military leadership was inept and incompetent, more interested in balls and hunting, than understanding the people who it ruled.

William Dalrymple has produced a stunning piece of history, lavishly illustrated, brilliantly written and for the first time, giving voice to the people of Afghanistan who suffered a brutal occupation and dealt the world's most powerful empire an enormous defeat. It would not be the first time, and for anyone wanting to understand why neither the Red Army or NATO could win, this is an excellent starting place.

Macrory - Signal Catastrophe: The Story of the Disastrous Retreat from Kabul
Posted by Resolute Reader at 11:17 pm