John Biggins - A Sailor of Austria 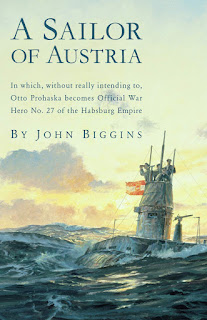 John Biggins' A Sailor of Austria is a fine novel that will inevitably be compared with George MacDonald Fraser's Flashman books. But this first volume of a trilogy is actually very different - not least because the hero is neither a coward, nor a racist product of British colonialism. On the other hand KuK Linienschiffsleutnant Ottokar Prohaska is also a unique character who manages to be present at some key moments in a (semi fictional World War One). Prohaska however is doubly unique - he's a U-boot captain for the Austro-Hungarian Empire, though by the end of the book (and the war) the new country, Austria, has no coastline or navy.

Its a simple idea that's humorous and poignant at times. The book is related by the centenarian Prohaska who has ended up in a Welsh old people's home run by an eccentric group of nuns. His many decorations, exploits and stories fascinate the staff who encourage him to record his history. This account, both highly personal and historic is the bulk of the book though it mostly focuses on Prohaska's experience of the gradual defeat of the Empire by its myriad of enemies.

It's unusual to read a book by a British author which focuses on the enemy, and its even more unusual that the character is not German, but Austro-Hungarian. Biggins has a detailed knowledge of the experience of World War One, as well as submarine technology and most importantly the nature of the Empire itself. It makes for a fascinating read.

At times the exploits of Prohaska and his crew are extremely hilarious, as with the story of how they came to bring a camel back to Europe in their submarine, or the tale of the exploding toilet. But the book is at its best when depicting the close solidarity of a crew trapped in a dangerous environment and utterly reliant on each other for survival. It makes the ending even more poignant.

Sadly A Sailor of Austria is very difficult to find as its out of print. I discovered it by accident and I will eagerly hunt out the sequels that are set within the extended time-frame of this book.
Posted by Resolute Reader at 5:45 pm