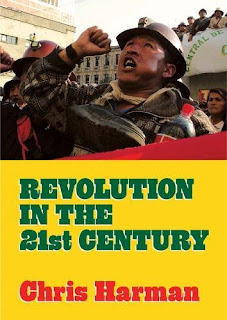 Chris Harman has been writing about the revolutionary transformation of society for over 40 years. Whether writing about the broad sweep of human history, the "Lost" German Revolution of 1919-1923 or in more detailed work on Marxism and History, he has, in my opinion been one of the best Marxist writers for decades.

This little book is a fantastic re-assertion of the Marxist theory of revolution. In only 126 pages Harman puts across both the necessity for revolution and takes up all the counter arguments you ever hear when you raise the transformation of society at work, or in the bus queue. In doing so though, his writing never sounds tired or cliché ridden, and he continually surprises with new examples and ideas.

For instance in an early chapter called "the actuality of revolution" Harman takes up the idea that revolution is unusual. He writes that

In fact, revolution is so characteristic a feature of the modern capitalist world that the 20th century can be described as a century of revolution.... Britain is virtually alone among European states in not having fairly recent memories of revolutionary change and most of the non-western governments represented at the United Nations would not have a seat without the revolutionary movements that ended colonial domination.

There in one paragraph Harman brings alive both the scale of revolutionary history, its internationalism and its importance.

Socialists are perhaps used to hearing discussion about revolution in the context of the Russian Revolution of 1917. Harman of course goes into detail about this most important moment in history. But he doesn't limit himself to the "classic" European revolutions. The events of this century in South America are used to illustrate arguments such as the inevitability of working class resistance and the necessity of independent revolutionary organisation. But he also shows, particularly in the case of Bolivia, how the working class is constantly changing.

Common to those on the right in Europe who claim that the working class is no more, Harman points out that commentators in South America argued that Bolivia was undergoing "de-industrialisation" and its working class disappearing. The reality is different, the numbers engaged in manufacturing has reason tremendously, and it was these workers who formed the core of those on the streets of La Paz who drove Mesa from office.

The final chapter "Knocking on History's Door" reasserts the choice facing humanity - the creation of a society based on need, not profit or the ongoing destruction wrought by the nature of capitalism itself. Harman wouldn't be a revolutionary Marxist if he didn't conclude by urging the reader to become part of building revolutionary organisations. It is a argument I am happy to reiterate.

I wanted to start my second reading of this brilliant book! After reading your post, definitevely I'll do!

greetings from Madrid
the frontline is everywhere!