Melissa Harrison - All Among the Barley 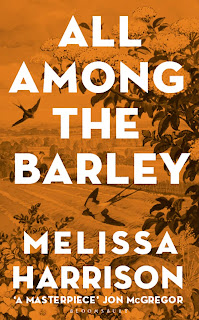 You don't have to read much fiction about the history of the English countryside before you encounter writing that is essentially about a fantasy rural idyll. In it, rural inhabitants live poor, but fulfilling lives, essentially in a balance with both the natural world and their compatriots, rich and poor, in the village. Disagreement - such as the failures of an absentee landlord or, the drunkenness of a labourer - usually resolve themselves through the internal democracy of the community; either that or happy accident. Weirdly these fantasies are nostalgic for something that never existed but are often tremendously popular.

Oddly enough a fair bit of non-fiction writing about the countryside falls into this trap too. Though there are also many exceptions. Ralph Whitlock's 1945 classic Peasant's Heritage mostly avoids the nostalgia trap, but has a telling comment about it's main subject, the agricultural labourer, the "English peasant ... the same man as his forefathers, the men who fought and won Agincourt, the men who made the face of rural England with crude tools and by hard work, and defended as passionately as they worked for it." A bigger problem is that books that are actually quite faithful accounts of working class life in the countryside are often stripped bare of their reality and turned, usually for the TV screen, into pastiches of their content. To choose two cases in point, Laurie Lee's Cider with Rosie is often remembered as a sun-infused coming of age account in a Gloucestershire village, but few people remember the murder that takes place when a rich returnee splashes his cash around and is collectively set upon by the locals. Flora Thompson's wonderful memoir Lark Rise to Candleford is often read for their accounts of life and nature in her home village but she notes the exploitation and oppression at the heart of country life. As I noted in my review of it she writes:


The joy and pleasure of the labourers in their task well done was pathetic, considering their very small share in the gain". Later when discussing the elaborate (and extensive) feast given by the farmer to those who'd laboured on the harvest, a celebration that was even extended to any passing "tramp", Thompson has her father comment that "the farmer paid his men starvation wages all the year and through he made it up to them by giving that one good meal. The farmer did not think so, because he did not think at all, and the men did not think either on that day; they were too busy enjoying the food and the fun."

Life in the English countryside was, as I tried to show in my own book Kill All the Gentlemen, one of constant class struggle against poverty, exploitation and oppression.

I dwell on this because I want to contrast it with Melissa Harrison's wonderful novel All Among The Barley about life in East Anglia in the early 1930s. I did put a spoiler warning at the top of this review, but I want to repeat it. Do not read further if you don't want to have this novel ruined!

Having read a few pages I was ready to lump it in with all the other terrible books about life in the countryside where the sun always shines, and the much needed rain comes during the night. But quite quickly I began to notice that something wasn't quite right. The main character Edie Mather is writing, as an adult, about her childhood, and occasional references to an event that took her from her home village left me with a real sense of foreboding. The story unfolds slowly, framed around the arrival of Constance FitzAllen in the village. Constance is very much the glamorous modern urbanite. She wears trousers, drinks in the pub and is not afraid to impose herself on the rural community. She is writing a series of articles about the countryside and wants to know all about the traditions that make up family and farming life. Here, for me, is the genius of the novel. Harrison has taken that awful trope of countryside nostalgia and inserted one of its proponents into her novel in the act of creating the fantasy itself. Of course Constance finds what she wants to find, though often to the bemusement of the rural community and in the process she begins to transform Edie.

Edie has little to look forward to. She's good at school but there's little chance for her to do anything than become someones wife "pushing out babies" every year or go into service somewhere. So Constance's London glamour entrances her. The reality of hard work, poverty and a prospect of a forced marriage to a man who rapes her, with a background of economic crisis and crop failure, help to push Edie closer to Constance, until in the novel's climax we see what has been increasingly hinted at - Constance is a rather slick fascist, who is writing for a far-right publication and believes that England's farming communities need to be protected and returned to their traditional ways. Fantasies of idyllic rural communities based on traditional values and the family are a favourite of fascists - both in the past and today and Harrison cleverly manipulates this into the story - though it should also be remembered that the left has not been immune from this either - with William Morris a case in point.

But what is really clever is how Harrison shows Constance slowly winning people to her point of view. Slanders against the few local Jews, hostility towards agricultural unions and criticism of big government lead to splits in the community and eventually, an enormous chasm opening up in Edie's family. Frighteningly in 2019 the method will not be unfamiliar as we survey far-right politicians around the world. The novel's ending is brutal (with an implicit critique of Thatcherism) and I had to read it two or three times to fully get its enormity.

Melissa Harrison has written a marvellous book. It turns the genre on its head; skewers the invented history of the countryside and does it at the same time as being a faithful account of life in a poor rural community. But this is certainly my highlight of 2019 and I am not sure I'll read a better novel in the remainder of the year.