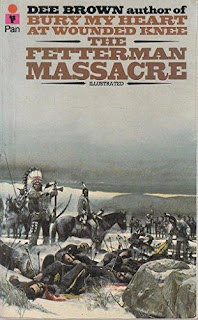 Dee Brown is the celebrated author of one of the most famous books on the Native Americans - Bury My Heart At Wounded Knee. It is a classic of its time and a painful read as it depicts the story of the genocide of the Indigenous people of the Americas at the hands of the US government. It was a formative book for me, though perhaps superseded today by other works such as Nick Estes' Our History is the Future. However I was keen to read Brown's Fetterman Massacre as it centres on a notorious incident in December 1866 when Captain Fetterman's force of US Army troops was massacred by an army of Sioux, Cheyenne and Arapaho warriors under the leadership of Red Cloud.

Red Cloud's war was a response by the Native Americans to the incursions into their territory by the US Army and settlers from the East. Brown's book focuses on a small aspect of the widr conflict, following Colonel Henry Carrington who built and setup Fort Phil Kearny to protect travels and settlers on the Bozeman trail. Carrington, together with a tiny military force and a few civilians, setup an isolated fort and attempted to maintain it's position in the face of increasing hostility from the local indigenous people. Carrington himself was a bit of an idealist, and he was in a difficult position - isolated, under-supplied and lacking in experience (he himself had never commanded in action). He was also under pressure from the likes of Fetterman to take a more aggressive attitude to Red Cloud's forces.

Brown artfully mines the documentary evidence to show how Carrington came to understand the weakness of his position and how the expedition begins to approach disaster. Fetterman himself is experienced in fighting battles, but only for the Union against the Confederacy. He has little experience of fighting the highly mobile, guerrilla, forces that Red Cloud commands. Probably more dangerous for Fetterman is his own racism and prejudices which lead him to see the Native Americans as easy enemies for the trained US troops. Famously Fetterman declared "With 80 men I could ride through the Sioux nation" and it is ironic that when he and his command perished in a brutal, but brief fight, casualties were almost exactly eighty.

Tragically for Carrington he became the scapegoat, despite Fetterman having repeatedly broken discipline and disobeyed commands. Carrington had warned of disaster and the Army bureaucrats had ignored him. Red Cloud could claim a major victory, that would not be surpassed until the Battle of the Little Big Horn a decade later.

While this is a great compact read, it lacked nuance and I felt the voices of the Native American people were drowned out, as was the wider context of the battle. Dee Brown's work is sympathetic to the Native American people but he also carries with him the legacy of an earlier era - he uses the racist term "half breed" for instance. That said, the work is in no way a celebration of the US Army and tells a fascinating, if horrible, history.