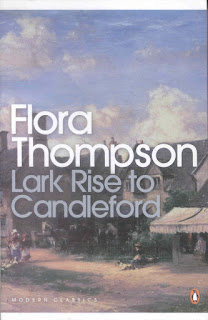 Flora Thompson's account of her childhood and early adult years in the semi-fictionalised hamlet of Lark Rise and then the village of Candleford is considered a classic of that peculiarly English book, that celebrates the countryside of yesteryear. But unlike much of that genre, Thompson's book is has much to recommend it. Firstly it is beautifully written. More importantly, while unashamedly sentimental, Thompson is not afraid of discussing the darker aspects of rural life. In this she is shaped by her father, whose political liberalism was unusual for Lark Rise. Take for instance, a near throwaway comment by Thompson when describing the celebrations as Lark Rise's labourers complete the harvest, they sang and shouted

Thompson comments "The joy and pleasure of the labourers in their task well done was pathetic, considering their very small share in the gain". Later when discussing the elaborate (and extensive) feast given by the farmer to those who'd laboured on the harvest, a celebration that was even extended to any passing "tramp", Thompson has her father comment that


the farmer paid his men starvation wages all the year and through he made it up to them by giving that one good meal. The farmer did not think so, because he did not think at all, and the men did not think either on that day; they were too busy enjoying the food and the fun.

Running through all three books collected within Lark Rise to Candleford is a sense of change. This manifests in many ways. The death of the old vicar of Candleford and the arrival of a new man with modern ideas and sermons. The coming and going of fashions, a little behind the larger villages and towns with their more immediate connections to the cities, new names for babies and "wages rose, prices soared and new needs multiplied". This is the coming of the modern world, though its continuities are perhaps greater than Thompson suggests. Most importantly for the author  are the changing attitudes to women and work, and as she secures her first job working in the post office, she is overseen by a woman with a very modern attitude. Had this been a major town, her mentor would have been a suffragette, and probably a socialist. As it stood she was a individual woman with advanced ideas who ran the post office and managed the village smithy.

Thompson's story is fascinating, though I was more taken by the incidentally details and given small insights into rural life at the turn of the 20th century. Take this demonstration that the class struggle is sometimes hidden and sometimes open:


A new field had been thrown open for gleaning... Bob Trevor had been on the horse-rake when the field was cleared and had taken good care to leave plenty of good ears behind for the gleaners. 'If the foreman should come nosing round, he's going to tel him that the ra-ake's got a bit out of order and won't clear the stubble proper. But that corner under the two hedges is for his mother. Nobody else is to leaze there.'

Class differences run through this book. Thompson makes clear that the gentry are admired by the majority, forelocks are touched repeatedly. But the gentry are not part of village life. They are separate and keep themselves aloof. Its summed up well at the huge party thrown at a nearby country house for Queen Victoria's jubilee. The gentry show themselves, then quickly retreat from the fun and games and the ordinary labourers and their families show barely disguised relief when released from the need to mind their manners and behave properly.

There's  no open class struggle here. But it is indicated with resentment over low wages a common complaint. Thompson repeatedly suggests that no-one really starved because the village looked after each other, but frequently she mentions charity from the church and on occasion the workhouse.

Thompson's book remains popular no doubt because it is beautiful. Published in the midst of World War Two, its passing references to those (including her beloved younger brother) who died in the First World War must have helped its popularity. Reading it today I can't but help think that its precisely because it covers an era of enormous change in English society that it is so fascinating. Though ironically as she was writing it 75 years ago, this was precisely what Flora Thompson was noting too.