Nick Estes - Our History is the Future 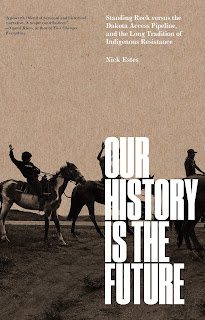 In 2016 a protest encampment at Standing Rock in the US state of North Dakota became a symbol of resistance to fossil capitalism. The camp, which arose out of indigenous peoples' movements, became a focus, in the dying days of the Obama administration, of bottom-up organisation against the expansion of oil pipelines. Quickly it gathered support and brought together disparate groups of people - from the indigenous communities to environmental activists, NGOs and even former members of the US military. The camp saw down brutal repression to become, at least in the short term, victorious. Perhaps just as importantly the "water protectors" helped inspire other campaigners across the globe. I remember speaking at a protest march against fracking at Barton Moss in Salford in the UK and a great cheer went up when I mentioned Standing Rock - a cheer that celebrated their struggle, not my speech!

Nick Estes' new book is subtitled "Standing Rock versus the Dakota Access Pipeline, and the Long Tradition of Indigenous Resistance" which neatly sums up his central argument: the protests that took place at Standing Rock are part of a long continuity of indigenous resistance towards a settler state that has sought to exploit the US's natural resources and people in the interest of profit and, to do this, has needed to destroy the indigenous peoples. This saw a genocidal war against the Native Americans, culminating in them being forced into smaller and smaller reservations, together with laws that codified their oppression. All this was justified through racism. Estes' book is a history of all this, which is at times difficult to read as well as inspirational.

I won't dwell here on Estes' account of the military repression of the indigenous people. Instead I want to highlight Estes' argument about the way that the US state made the repression and attempted destruction of the Native American way of life a central part of its approach towards those communities. He explains:


The design and development of the carceral reservation world was well under way by the time Cheyennes, Lakotas, and Arapahos made Custer and his Seventh Cavalry famous. In 1876 Indian Commissioner John Q. Smith envisioned US Indian policy as having three central goals: to concentrate remaining Indigenous peoples onto fewer reservations, to allot remaining lands, and to expand US laws and courts' jurisdiction over reservations... the latter two goals were achieved through the disintegration of political and social structure, and the carving up of the remaining communally held lands. The fur trade may have introduced the capitalist market, but it never made the Oceti Sakowin [this is the correct name for the people commonly called the Sioux] truly individualistic, and communal land practices and social customs still prevailed. This was the final frontier.

He continues that "reservations thus became sites where social engineering was used to break communal organisation".

While the use of military force against the indigenous people declined it never disappeared and there were other ways of destroying communities. The creation of dams is a case in point, which Estes shows were frequently built to generate energy, and often located in land or reservations that historically was of importance to indigenous people. Take the Garrison Dam which "inundated the For Berthold Reservation" drowning 152,360 acres of land belonging to the Mandan, Hidatsa and Arikara nations. But the dam was modified by the Army Corp of Engineers to ensure that the "majority-white border town of Williston, North Dakota" lost no land. The dams location was chosen to avoid damage to other towns whose residents were mainly non-indigenous. No such care was taken for Native American people, and these dams, which were part of the "Pick-Sloan" project of the late 1940s where described by one historian as destroying "more Indian land than any single public workers project in the United States".

The question of land could not be separated from wider social questions - poverty, racism, unemployment and lack of decent housing. Este thus describes as succession of social movements that arose where indigenous people fought back for justice - in the late 1960s these took a more radical turn as a new generation of young people challenged both their elders and put forward more powerful demands from the government. To me, at least, here is a forgotten history of those who, alongside the black, gay and women's movements of the 1960s, created a revolutionary "Red Power" movement, which is remarkably inspiring. But the struggle is by no means over. Estes points out:


Anti-Indianism has also been reinforced under neoliberalism - the restructuring of politics and economy towards privatisation...But the role of the US state in reproducing anti-Indianism has also increased since the mid-twentieth century, including through the expansion of the military and prisons... Native inmates [in South Dakota] make up 30 percent of the total [prison] population while only constituting about 9 percent of the state's population. The rise in incarceration rates directly correlates with increased Native political activity in the 1970s.

Estes is clear that justice for indigenous people will not be solved via the US government in its current form. Clearly there needs to be more funding for schools, hospitals, housing and so on. But at the heart of US society there is a great injustice - the creation of the US state required, and requires, the systematic oppression of the indigenous population. Capitalism will not be able to fix this, as it will require challenging the very nature of the US state. This is also true of many other countries who built their wealth through colonialism and imperialism, and the systematic oppression (and decimation) of people in Africa, Asia, South America and Australasia. Estes details the strong internationalism of the indigenous communities, who have created international movements (eg solidarity between Palestinians and Native Americans) to fight for justice.

Real justice will arise when society can accept that indigenous peoples must have the right to solve problems in their own way. Estes notes that one vision for this was Lenin's argument for the "right of colonised nations to secede and declare independence from their colonial masters" but he cautions, while it is a view that has been taken up  by many in the "Asian, African and South American contexts" it is "entirely absent in North America, except among radical Indigenous, Black, Asian, Caribbean and Chicanx national liberation movements".

The logic of capitalism means the destruction of natural resources and people in the interests of wealth accumulation. One barrier to the continued search for profit has always been, and remains, the resistance of indigenous people. As Standing Rock showed these struggles can ignite further alliances, and such unity raises the potential for a radical challenge to capitalism. I hope that occurs, for otherwise we will not see, what Estes calls "the emancipation of earth from capital".

Nick Estes' book is a powerful read. I learnt a great deal from it - not just about the history of indigenous people in what is called "Turtle Island", but also about what liberation means for them. These struggles, in the face of the most brutal, racialised repression from the US state, are inspirational, but also hold up hope that a better world is possible.