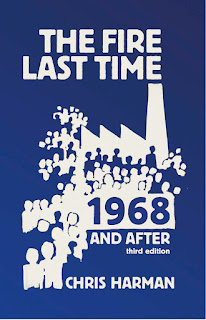 Rather like 2017, 2018 is proving to be a year of reading books associated with various anniversaries. But most importantly it is fifty years since 1968, a year of global rebellion, and Chris Harman's Fire Last Time is an excellent introduction to the period. I first read this as a student when I was a new recruit to the socialist movement and the accounts of massive student rebellion linking together with workers rising was extremely inspiring. Re-reading it today I was struck by Harman's ability to contextualise these struggles and highlight the dynamic of student and workers' revolt.

1968 saw the May events in France when the outbreak of student protest against de Gualle's government led to massive street fighting in Paris and, until then, the biggest General Strike in history. It also saw the Russian invasion of Czechoslovakia to stop the Prague Spring, huge radicalism in the United States against the Vietnam War and an escalation in the Civil Rights movement. 1968 was the year Martin Luther King was assassinated and the Black Panther's became mainstream. It was also the year of student revolt (and massacre) in Mexico, and in Britain (where Harman was himself active) student radicalism, leading within a few years to workers struggle.

Within a few years, military juntas and fascist dictators in Greece, Portugal and Spain had also fallen, with movements that shared many similarities to those of 1968. Italy saw an explosion of workers struggle and in Portugal the spectre of revolution in Europe was raised for the first time since the 1920s.

Harman is brilliant at showing the dynamics of these movements, how they arose out of changes within the system but where also limited by existing organisations. In particular the role of the Communist Party in Western Europe was to limit struggle, redirect it and often to conciously protect the system in exchange for a seat at the Capitalist table. Take, for example, Harman's comments on the end of the French revolt. de Gaulle had described the situation as a choice between elections and civil war. But Harman points out that there was another way forward,


This would have meant encouraging forms of strike organisation that involved all workers, the most 'backward' as well as the most advanced, in shaping their own destinies - strike committees, regular mass meetings in the occupied plants, picketing and occupation rotas involving the widest numbers of people, delegations to other plants and to other sections of society involved int eh struggle. Everyone would then have had an opportunity to take part directly i the struggle and to discuss its political lessons. It would also have meant generalising the demands of the struggle, so that no section of workers would return to work before a settlement of the vital questions worrying other sections.

In other words, what was needed was a deepening of the struggle. No organisation existed that was willing to do this, and it wasn't certain that it would have been successful. But the Communist Party didn't try - it was to concerned with events getting out of control and threatening its own position. Instead they did the opposite - preventing student protesters meeting workers on strike for instance. The result was the defeat of the movement and de Gaulle winning the election.

1968 saw rebellion grow on a mass scale, and we get a real sense of the way that this transforms ordinary people. For example, this account, quoted by Harman, by a worker who was also a part time student, of a meeting in their factory in the midst of the Yugoslavian student movement.

There are countless other examples in this book, and while Harman apologises for focusing on key movements (particularly Western Europe) he does highlight many struggles that are not usually associated with 1968.

But his analysis stands out also for his ability to locate 1968 in wider contexts.


1968 was itself a product... of the way the pattern of capital accumulation on a world scale had caused a crisis of US hegemony, of the fragmentation of the Stalinist bloc, and of the fusing together of formerly submissive rural populations into powerful new groups of workers. Likewise objective economic changes had led to the creation of the vast new student populations, forced to try to learn sets of ideas which no longer made sense of a world that seemed to be cracking up.

He continues that without these changes, the


student movement along would have ended as it began, as a pressure group committed to university reform. The anti-war movement... would have been trapped in the politics of pacifist protest and moral indignation. Revulsion at the Russian invasion of Czechoslovakia would merely have strengthened liberal ideas in East Europe and built Eurocommunist reformism in Western Europe. Even the strikes in France might have been experienced just as economic protests, without any great ideological significance.

This is important because it illustrates that 1968 was not a unique event but arose out of the internal contradictions of capitalism. While events will not repeat themselves, the contradictions have not gone away, and so 1968s lessons remain important. Crucial to this is the experience of the newly formed revolutionary, anti-Stalinist, socialist organisations. Harman devotes space to showing why many of these failed to grow and why others were successful. But he points out how, at key points, particularly in the aftermath of 1968 some of these groups were able to play important roles in the struggles that took place. Chris Harman devoted his life to building revolutionary socialist organisation. The First Last Time was an important contribution that helped a new generation understand that vital need. In 2018, as capitalism once again offers us war, racism, poverty and now environmental disaster, the book deserves to be read by a new generation of anti-capitalists.

The Fire Last Time has just been republished by Bookmarks Publications, with a new introduction by Joseph Choonara.