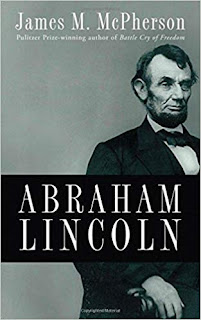 James M. McPherson's Battle Cry of Freedom is one of the best works of history that I have ever read, so I was extremely pleased to find this very short biography of Abraham Lincoln in a second hand bookshop recently. It followed on nicely from Walter Johnson's history of slavery and the rise of capitalism River of Dark Dreams that I'd finished the previous day.

Despite it's short length (my edition has less than 80 pages including references and index) McPherson's book does an admirable job of covering the key strands of Lincoln's life and ideas. In the context of Johnson's book it's notable that Lincoln's two trips to New Orlean's carrying farm produce in 1828 and 1831 helped shape his views fundamentally; as Lincoln himself said about another trip to Louisville "there were, on board, ten or a dozen slaves, shackled together with irons. That sight was a continual torment to me".

But McPherson argues that while Lincoln's anti-slavery position was a key issue, it wasn't his only one. Lincoln seems more defined by his belief that a properly run system would allow everyone to better themselves should they chose to. As McPherson explains while reporting a debate that Lincoln took part in 1860 that helped push him towards selection as a Presidential candidate:


"I am not ashamed to confess... that twenty-five years ago I was a hired labourer, mauling rails, at work on a flat-boat-just what might happen to any poor man's son/." But in the free states an ambitious man "can better his condition" because "there is no such thing as a freeman being fatally fixed for life, int eh condition of a hired labourer." The lack of hope, energy, and progress in the slave states, where most labourers were "fatally fixed" in the condition of bondage, had made the United States a house divided. Republicans wanted to keep slavery out of the territories so that white farmers and workers could move there to better their conditions without being "degraded...by forced rivalry with negro slaves." Moreover, said Lincoln, "I want every man to have the change-and I believe a black man s entitled to it - in which he can better his condition."

In other words Lincoln wanted an efficient and benevolent capitalism that would benefit all - black or white - and getting this required the end of slavery.

Central to Lincoln's story, not least because he died quickly after it ended, is the question of the Civil War. Lincoln emerges from McPherson's autobiography (and indeed Battle Cry of Freedom) as an astute leader capable of being flexible to win the war. In 1865, the last year of the war, Lincoln "devoted more attention to his duties as commander in chief than to any other function of the presidency". But the key question is slavery and McPherson argues that the emancipation proclamation "freed [Lincoln] from the the agonising contradiction between his antislavery convictions and his constitutional obligations".

Thus it was decision born of practicality, not principle. In 1861, as McPherson emphasises, Lincoln revoked a military order from one of his generals freeing slaves because it would have driven Missouri into the hands of the Confederacy. But once it looked like the war might be lost, Lincoln declared slaves free to be free (except in slaves states that had remained in the Union) in order to help win the war, and recruited 200,000 black soldiers to fight on the Union side. The nature of the Proclamation meant that the end of the war would not end slavery, so Lincoln also pledges to abolish slavery. McPherson argues that by 1863, Lincoln's Gettysburg address could proclaim "a new birth of freedom" because it was clear that post-war US would end slavery.

So McPherson's Lincoln is a leader who is prepared to use the emancipation card as a tactic, despite his principled position against slavery. Once played though, he refused to reverse the decision, "no human power can subdue this rebellion without using the Emancipation lever as I have done". It is notable, as McPherson emphasises, that Lincoln said this expecting to lose his re-election. Military success changed this, but it does underline the weak position that Lincoln was in in taking his stand. It is also notable that the decision to emancipate the slaves and give them the vote, led directly to his own death by assassination at the hands of the racist John Wilkes Booth.

This is a long review of a short book. But I wanted to draw out the way that McPherson locates Lincoln's actions in the Civil War with his anti-slavery politics and his commitment to the existing system. Lincoln was able to hold an unsteady coalition together to defend the Union in the firm belief that doing so would create a benevolent capitalism that would benefit everyone. Lincoln is thus not a principled revolutionary, but a bourgeois liberal pragmatist who wants to win the Civil War to shape the direction of the US economic system, but whose hand is forced by his need to mobilise the slaves of the South and the free blacks of the North. It's this nuanced analysis by McPherson that makes this short book so worthwhile for understanding the struggle against slavery, the US Civil War and the nature of the state that emerged - one that has yet to fully throw off the racism that slavery required.