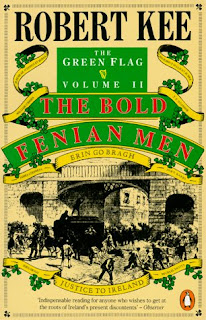 When I travelled to the north of Ireland last year I enjoyed reading volume one of Robert Kee's history of Irish Nationalism The Most Distressful Country. In my review I remarked that I looked forward to reading the second volume and a follow up trip to the Antrim coast this year provided the excuse to read that. Unfortunately, while there is much of interest in The Bold Fenian Men it failed to give me the same satisfaction as the first volume.

The period covered by volume two, roughly 1850 to the Easter Rising of 1916, and I think that in part this is the source of the problem. Kee notes with irony, that for most of the period the landowners and businessmen that exploited the majority of the Irish population were themselves Irish. In fact, Kee emphasises that the development of capitalism in Ireland was very much an Irish affair. Britain was the colonial power, that sucked the wealth and population from the country, but capitalism in Ireland was run by Irish capitalists and landowners. Thus the growth of popular Irish nationalism is caught in a trap - on the one hand the mass of the population at various times demanded Irish independence, but also the Irish ruling class also wanted, at various times, their own version of independence or home rule. Kee seems unable to distinguish between the two class interests and thus, his book at times seems confused and inadequate.

At times Kee does comment on the contradictions caused by class to nationalism. For instance, in his limited discussion of James Larkin and the Dublin strikes in 1913 he notes the reports of the appalling housing conditions of the majority or the Dublin working class... "in looking for underling reasons why some of the Dublin working class were soon to diverge politically form the policies of the Nationalist Party, it may not be insignificant that the Corporation at this time was solidly Nationalist,m and Messrs O'Reilly, Corrigan and Crozier were enthusiastic supporters of Home Rule."

Thus the success of the earlier struggle over Land rights by the Irish poor, led to a corresponding decline in support for that nationalist movement. Kee seems surprised by this, but it seems to me not necessarily surprising. The poor had won significant gains, and while this struggle was in place and led by the Nationalists it had encouraged support for that cause. In the aftermath, Independence or Home Rule was not on the agenda and the movement declined. Discussing later nationalist movements Kee highlights the involvement of a wide variety of middle and (occasionally) upper class Irish nationalists. He stresses that what they had in common "was a passionate belief that Ireland should be in a position to defend her constitutional rights against every threat in the probable event of the Home Rule Bill becoming law." But in his list there are no representatives of the working class or their organisations.

This is not to say there isn't anything of interest in The Bold Fenian Men. Kee does at least record the amazing bravery of various nationalist movements. He also notes the way in which the ruling class is prepared to ignore or subvert democracy when their interests are threatened. In particular Kee highlights the way that the Orange Order was able to mobilise and threaten armed insurrection, mutiny and rebellion if Home Rule went ahead; supported to a great extent by various English politicians and military figures. Sadly it is all too clear that the Irish nationalists had too much faith in constitutions and parliamentary democracy, even as their opponents pledged to undermine these to protect their interests.

Ultimately Kee's book is flawed because his starting point is nationalism, not the wider class dynamics of Irish society. There is little here about the way that Britain is exploiting Ireland in the period, in fact, the British Parliament comes across as a relatively benign institution that is moderating the debate about Home Rule. In reality, Britain was a colonial power that has its own interests and the debates about independence were ones that reflected class struggle in Ireland and the competing interests of different capitalists. His dismissive account of the Easter Uprising of 1916 only underlines his mistaken approach.

Kee - The Most Distressful Country
Woodham-Smith - The Great Hunger
Mitchell - A Rebel's Guide to James Connolly
Posted by Resolute Reader at 7:45 pm