Dave Goulson - A Sting in the Tale 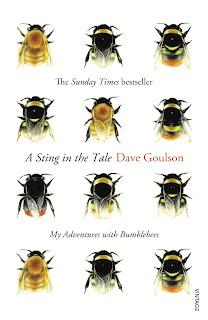 This is a charming and entertaining book that at its heart has an important ecological message of interest to anyone concerned about a sustainable future, particularly, an environmentally friendly agriculture. Dave Goulson is a world expert on bumblebees, but he is also an enthusiast for the tiny creatures. He has the rare ability that experts often lack, of making his specialist subject both interesting and accessible. A Sting in the Tale begins with Goulson's childhood fascination with animals, plants and insects, his experiments with taxidermy and butterfly collecting, and his growing awareness of the natural world. It is a story that Goulson tells with wit, and a fair amount of self-deprecating humour, and intertwines it with the history of the study of the bumblebee.

There is an oft repeated quote about bees, attributed to Albert Einstein, (though Goulson argues Einstein was unlikely to have said it) which suggests that if bees die out, human society will rapidly follow. Goulson argues that this isn't realistic, but does explain how central bumblebees are to the pollination of key plants - including fruits, nuts and many other crops that we rely on. He explains in detail the evolution of bumblebees, their central position in plant ecology, and how they have been moved around the world to better serve the interests of agriculture.

I don't have space here to summarise everything about bumblebees that he writes about. The "cuckoo" bees that steal other bee nests, the way that bees use chemicals to detect whether a flower has recently been visited by another bee, how they use colour to avoid predators and so on. Though I feel I should mention that I was fascinated by Goulson's detailed explanation of bee reproduction and how this has, in evolutionary terms,  led to their collective behaviour. In short this is because female bees have more DNA in common with their sisters than their children, which helps create a collective interest.

But for me the key part of the book was the question of bees and agriculture. When writing my own recent article on capitalism and agriculture, I noted the way that a bee industry has developed around the almond industry in California. There, monoculture fields, high usage of pesticides and destruction of the sites (like hedgerows) that bees nest in has created fields devoid of insect life, and bees are brought in their millions across the USA to pollinate crops. Goulson shows how this industry has become global, with factories producing packaged nests for farmers to pollinate crops. Interestingly this is not particularly new, though it is on  massively expanded scale. When European farming moved to New Zealand in the 18th century, bees had to be sent over to pollinate the crops. In turn this had an impact on local ecology (though it created a reservoir of bees to potentially replace extinct species in the UK).

But this isn't simply historical - the introduction of bees for the tomato industry has meant farmers can increase profits massively and cut labour, but it can have a tragic impact on local ecology as bees displace "native" species. The problem isn't simply about the disruption of ecologies. But also that factory farming of bees can produce the perfect environment for the spread of disease. So industrial farming has both damaged the natural communities of bees and produced an industry that also threatens bees! As Goulson writes:


Whether or not a European disease is the cause of these terrible declines, the principle remains. Shipping bees around is inherently risky unless they can be guaranteed to be free of disease. Oddly, despite the commercial trade in bumblebees now being well over twenty years old, there is very little regulations. Honey bees cannot be transported between most countries unless they have been certified free of their major diseases, but no such regulations have been applied to bumblebees.

The book concludes with Goulson's role in trying to preserve and save bumblebees by expanding their natural habitats and educating people about the threats to them. One heartening fact is that farmers seem very keen on being part of the solution, demonstrating once again that rural communities aren't somehow anti-environment and only concerned with profit.

I have no difficultly in recommending Dave Goulson's book. It's an easy read, but full of fascinating information and real insights into ecology. I was annoyed at his tendency for unflattering and jokey descriptions of his students - "she had a very loud voice and an astonishing capacity for food" went one, and "a pretty and terribly well-spoken girl" for another. It felt patronising and unnecessary and detracted from the excellent writing. That aside A Sting in the Tale is a recommended read, and I look forward to reading Goulson's other writings.

Posted by Resolute Reader at 10:26 pm