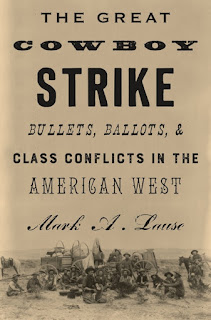 Countless western films, novels and artworks have portrayed the "cowboy" as a lonesome figure, surviving through his wits and ability to quick draw a six shooter. The reality, as this unique book shows, is that the cowboy was a worker. Badly paid, living a life of intense physical hardship, with seasonal and often highly skilled work. They were never loners. Looking after a herd of hundreds of cows was a collective effort and cattle drives required the support of lots of men.

These conditions led to a series of strikes. Cowboys didn't wait to form unions, if they acted at the right time of the season they had enormous power to force the large cattle companies to give them massive pay rises. These strikes were strong, numerous and spread as the cowboys moved along the trail. But they had an inherent weakness - being seasonal work the workers found themselves at the mercy of the employer the next year, and many blacklisted strikers found it near impossible to work again.

This is of course a story that is never told. In an of itself it would be interesting just as the story of an unusual and forgotten episode of working class history. But Mark Lause puts the strikes in the context of the transformation of the American West and, crucially, the development of US captialism and I would argue, the modern US state. One thing that is very apparent about these strikes is how violent they were. Gunfights were common, the assasination of strikers and their leaders was frequent, and many of the classic episodes of gunfights that occur in films are often repeated here in the context of strikers, or former strikers, being hunted down by posse's that were little more than lynch mobs.

Take this example of a "militia" setup by cattle owners in Montana, after a series of strikes. The vigilantes, called "Stuart's Stranglers" after their leader hunted down former strikers who they described as "like many a rebel and anarchist westerner" and perhaps killed up to 75.


The conduct of the Stranglers proved to be notoriously brutal. At one point, they captured a mixed race boy who could fiddle and forced him to entertain them for the evening. The next day they killed him. 'His being a fiddler hadn't nothing to do with his being a horse thief," one said. [Former strikers were often labelled rustlers so they could be executed without trial].... The perpetrators included the founders of the state of Montana. Their '3-7-77' warning - said to notify targets to buy the $3 ticket to the 7am stage to take the 77-mile trip from the area-remains part of the insignia of the state's highway patrol.

There is a thus a direct link between the anti-working class, racist violence unleashed on the cowboy strikes and the modern police system.

Lause however highlights another aspect to this, which is that this takes place in the context of the larger cattle firms, and their associated industries like the railroads, carving up the American West into huge, enclosed, fenced off lands. The battle between the open-range and the fence builders is the background to many a western. But as Lause points out, in those stories, the small-holders often win. In reality, big capital carved up the west and those who resisted were turfed out, or killed.

There is much more to Lause's book. But I actually found it remarkably difficult to follow in places. In part this is because much of the book dwells on aspects of US history and particularly Labour history which is completely unknown to me. His descriptions of the way that various left organisations tried to develop working class parties was at times difficult to follow. While Lause carefully deconstructs the classic image of the US west, I found the alternative a little difficult to work out, at times Lause seems to focus on events which are difficult to place in the wider narrative.

That said there is a lot in this book for people trying to understand the development of US capitalism, and those who fought against it. I loved this account about Eleanor Marx Aveling's visit to Cincinnati in 1886, "as cowboy strieks swept the West":


The local socialists took her, her husband and another European visitor to see a ground of cowboys on tour there. The comrades lingered behind after the costumed performance and introduced themselves to one of the performers. "To our great astonishment," she recalled, the cowboy "plunged at once into a denunciation of capitalists in general and of the ranch-owners in particular." "Broncho John" Sullivan assured them that many of the cowboys had "awakened to the necessity of having a league of their own" - and that a Cowboy Union or affiliates of the Knights of Labor seemed likely.

Resistance to capitalist domination is a forgotten part of the American west, and many of the famous and infamous figures beloved of books and films played a part in that story. When trying to understand 21st century America, we cannot forget the racist violence that helped entrench the state in the first place - violence against the indigenous peoples, the slaves and the working class. Lause's book is an interesting, if challenging introduction to that.