Carl J. Griffin - The Rural War: Captain Swing and the Politics of Protest 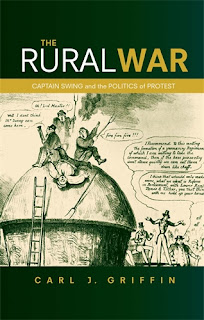 This is the most recent serious book on the Captain Swing movement. Its author is keen to present it as the definitive work that surpasses two other earlier book lengths treatments. These are the Hammond's Village Labourer and Hobsbawm and Rudé's Captain Swing. Griffin's certainty of his works' improvement on its predecessors irked me somewhat as I don't think it's fair to say that neither book offers students of rural class struggle something.

However it is true, as Griffin can say, that both of them missed crucial parts of the struggle and his work does highlight how the Swing movement was brother more intense, and more extensive than hitherto understood. Of Hobsbawm and Rudé he writes that they "seriously underestimate the level of reported disturbances".

Griffin also attempts to introduce other missing aspects of the history of the period, including the role of women, of which more shortly.

This review will not repeat an account of the Swing movement itself, but essentially this was a movement of popular outrage at rural economic conditions. The origins of these problems were simple enough - wages were low, jobs were scarce and farming was now for profit. But the situation was made worse because the standard system of poor relief was so inadequate. Old traditions however remained. Griffin notes that rural workers believed that "public relief was a right" and that "field labour [w]as a right". He argues that this "fostered a 'culture of xenophobia'," (the quote is from the historian Keith Snell) against non-indigent and migrant workers. In the context of rural England in the 1830s this meant attacks on Irish migrant labourers. Certainly this aspect was neglected in earlier histories and is an interesting fact that helps understand some of the dynamics of the period.

Griffin also argues, and I think this is an extremely important point, that Swing was not a "bolt from blue" as Hobsbawm and Rudé suggested, instead it was an intensification of events. Attacks on migrant labourers, as well as earlier attacks on machines, riots, protests and threatening letters, are part of the Swing "prehistory". Griffin also highlights how the movement continued after 1830 arguing that the repression didn't simply destroy Swing, but changed its form. For instance there are a number of cases when labourers who had won a pay rise from local farmers protested and burnt down targets again when the increases were removed.

Swing took place in the context of economic downturn. But it also took place at a time of enormous political upheaval. The 1830 French Revolution drew some support from rural workers and there were cases of the French tricolour being waved at protests. Another factor was the struggle for Parliamentary Reform and Griffin is particularly useful at understanding the interplay between that and Swing itself.

But its the sections on gender politics and the Swing movement that Griffin clearly feels are some of the most significant developments on earlier work. Here he argues that the role of the male agricultural labourer was being challenged. Their labour, he says, was about a family wage and this was being undermined. Women themselves took part, on occasion in protests during Swing and "even if men were trying to reassert their economic and household-political primacy, women clearly too had much to gain from Swing and therefore might support their husbands and brothers".

Clearly there is likely some truth to these factors, though a lack of evidence is a problem. I find Griffin's discussion of the sexual nature of machine breaking more problematic. He quotes George Youens, a labourer arrested for destroying a threshing machine at Elham, remembering that some of the gang shouted "Kill Her - More Oil". Griffin argues "Threshing machines became proxies for female bodies, something they as men should control, dominate and discipline... the allusion in the quote is in all probability to sex. Not only wasa 'woman' going to be 'killed', but the machine-breakers also were going to rape 'her'."

From a "misogynistic perspective" writes Griffin, the "machine's rhythmic action combined with the fact that it had to be 'served' through 'entry' meant that it was not unlike the objectified sexualised female body."

Personally I feel that is somewhat contrived. That's not to say that gender politics did not play a role in the Swing movement - as with Rebecca and a host of other rural movements, symbolic cross-dressing was part of some of the actions. But this over-sexualised interpretation of the Swing movement doesn't seem to fit with the evidence that Griffin has. He asserts that "gender politics in the Kentish machine-breaking heartlands shows the ingrained nature of sexual violence towards women" that sexual violence against women was an "integral part of labouring life", but I'm sceptical that the evidence proves this (Griffin highlights five cases). Even if true it seems a big leap to suggest that machine-breaking was a "reassertion, as psychological as much as it was public, of male power". I suspect that the vast majority of those engaged in machine-breaking did not approach the action from this point of view, but rather because they wanted better conditions for them and their families. If this is because their traditional roles were being challenged then we must understand that this is how class struggle takes place - in the context of the ideas "inherited from the past" and "not in circumstances of our choosing".

However Griffin is right to explore the role of women (and gender politics) in rural movements like Swing, a role that is usually ignored or dismissed. While I was not convinced by his conclusions here, the question of how women joined in the struggles for social and economic justice in the early years of capitalism are of great importance.

In conclusion I found Griffin's book very useful, developing early history a great deal; expanding the coverage of the struggles and asking some important questions of both the historical material and previous historians. Anyone studying Captain Swing will gain a lot from reading this.