Martin Green - A Landscape Revealed: 10,000 Years on a Chalkland Farm 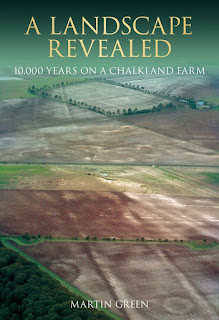 While seemingly a rather specialised topic, Martin Green's history of the neolithic, bronze and iron ages as understood through studies of the pre-history of his farm in Cranborne Chase contains a wealth of information. The Chase, an area roughly north-east of Blanford Forum in Dorset contains hundreds of locations of archaeological interest. Many of these are part of what should be understood as a cultural landscape, with sites frequently placed in relation to others.

Green is a farmer, but he has an immense skill and knowledge as an archaeologist and decades of work has led him to make some extremely significant finds. While some of the locations mentioned in this book such as the two iron age forts at Hod Hill and Hambledon Hill are well know (and well worth visiting) many others are either less well visited, or simply exist as crop marks or excavations.

I was inspired enough by Green's account of Knowlton Henge to visit. As the author explains this ruined 12th century Norman church was built in the midst of a large Neolithic henge. It does not take much expertise to understand the way the Christian church was trying to usurp "pagan" traditions here.

The book is full of fascinating details; from the explanation of archaeological method (including a chapter by Dr. Michael Allen on the links between snails and archaeological investigations) to the way modern science allows us to follow the travels of individuals thousands of years ago through the study of their bones. It is also extremely well illustrated.

This isn't a book for the casual reader, but for someone exploring the pre-history of Dorset its invaluable.

Posted by Resolute Reader at 10:29 pm