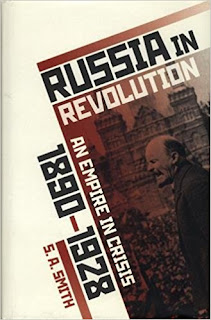 S.A. Smith's Red Petrograd is one of the best books I've ever read in the Russian Revolution, so I had high expectations of this one. Sadly I was disappointed, even though there is much that I found of interest in it, and even for people like myself who have read widely on the subject there is significantly new material.

This review is not the place to rehearse the story of the Revolution itself. Following a useful discussion of Russian history. Smith moves to the story of 1917. Given the criticisms of the October Revolution by the right, it's worth quoting Smith's conclusions about events:


The seizure of power is often presented as a conspiratorial coup against a democratic government. It certainly had the elements of a coup, but it was a coup much advertised, and the government it overthrew had not been democratically elected. It is noteworthy how few military officers were willing to come to the aid of the government... The coup would certainly not have taken place had it not been for Lenin; and thanks to the decision of the moderate socialists to postpone the Second Congress, hi plan to present the latter with a fait accompli was achieved. But the execution of the insurrection was entirely Trotsky's work, cleverly disguised as a defensive operation to preserve the garrison and the Petrograd Soviet against the 'counter-revolutionary' design of the Provisional Government. in the last analysis, however, the Provisional Government had expired even before the Bolsheviks finished it off.

Following this, Smith looks at how the Bolsheviks' attempted to build on their success, and the various aspects of the consequences. There are useful discussions of how the Bolshevik's support for the right to self determination played out. Thirteen new states were created out of Russia between October 1917 and December 1918, for instance. But Smith also highlights how this went wrong - for instance the way that the Bolshevik's had to keep Ukraine by military not political means. There are also some fascinating sections on the way the Bolsheviks related to Muslims, invited to "order their national life 'freely and without hindrance'" in November 1917.

All of this is excellent material and there are some fine stories and quotes from the period. But the problem is Smith's framing of the material. Smith rightly sees the economic and political damage caused by the Civil War as a key turning point for the Revolution. While he notes that both sides committed "terror", he does acknowledge that the motivations were very different and that Red Terror was often in response to the brutal reality of the Whites.

But I think Smith underestimates the impact of the Civil War one the base of the Bolshevik's and their strategies. For instance, when discussing the Kronstadt rebellion against the Bolsheviks, Smith highlights the context, but neglects to point out that the Kronstadt sailors were not the same force that had been a bastion of the Revolution. They were much depleted by the Civil War and other political roles and had been watered down by an influx of new recruits. Smith's argument makes it looks like a key revolutionary force had changed sides, when this was not the case.

More problematic is the continuity that Smith places on the Bolsheviks before the seizure of power and long afterwards. There are two aspects to this. Firstly Smith frequently discusses the Bolsheviks before the Revolution (or in its early stages) and the strategy perused by Stalin as though it were the same organisation. Secondly I think he places the "Great Break", the rupture between Stalin's strategy and the old Bolshevik revolutionary strategy much too late. He argues that this was in 1928, but it is clear by then, that the policy being pursued by Stalin was already very different.


The Bolsheviks, who had so resoundingly rejected Russia's heritage in favour of proletarian internationalism, found that the greater the distance they travelled from October, the more they were hemmed in by these deep structuring forces. They did not become wholly captive to those forces, nor did revolutionary energies exhaust themselves, as Stalin's revolution from above' demonstrated, but in many areas the more utopian ideals of the early years were gradually abandoned and a new synthesis of revolutionary and traditional culture crystallised... It came about... because the Bolsheviks were transformed from a party of insurrection into a party of state builders.

But this confusing argument suggests a continuity between 1917 and the 1930s, which is inaccurate. The reality was there was a massive break, that required the liquidation of the old Bolshevik party and Stalin rebuilding a new one in his own image.

Smith effectively argues that it was the nature of Lenin and the Bolshevik organisation he crafted that led to the centralisation of power. "Lenin had ruled by virtue of his charisma, rather than his formal, position and he bequeathed a structure of weak but bloated institutions that relied for direction on a strong leader". There is some truth to this, but it is not the whole story and while Smith doesn't ignore the other problems he down plays them. Thus while he does acknowledge the strategy of international revolution that the Bolsheviks hoped would solve their problems, he doesn't underline that this was actually quite realistic. In fact there is little mention here of the German Revolution, nor the other revolutions that shook Europe post 1918. Oddly there is precious little on the Comintern, before or after Stalin, except a few brief discussions.

Smith is also prone to some sweeping statements that undermine some of his better analysis. Stalin, he notes, "had read Machiavelli". So what? I suspect most intellectual Marxists of the period had. Lenin's great work State and Revolution is dismissed as having "utopian flights of fancy" in which a "cook or housekeeper could learn to run public affairs". It wasn't that much of a flight of fancy given that Soviets were being set up across Russia in their hundreds and supported by millions of workers and peasants while Lenin wrote it.

Ultimately I was left disappointed by the book. It has much of interest, but at times feels like a crude assault on Bolshevism (and Lenin in particular - hence an unreferenced quote saying Lenin described avant-guard art as "absurd and perverted"). The author concludes by arguing that the importance of the Revolution was not in its actuality (he suggests the Great Break was more important than the Revolution that preceded it), nor in the hope that workers in power would led to an end to inequality and exploitation. He argues that the Revolution's answers to these problems were "flawed".

Smith clearly sees capitalism as leading to war and environmental destruction, but dismisses the only political organisation that has created a fundamentally different workers state, arguing that their revolution "wrought calamity". Yet the reality was the calamity was a consequence of the counter-revolution that strangled the revolution and the failure of international revolution to break the chains that bound Russia in isolation.

That said, Smith can, and does celebrate what the revolution meant for ordinary people and millions of others around the globe. I can agree with him about how 1917 lifted people, and taught them to look further afield, before the revolution was defeated and drowned in blood. One example from Smith's book will suffice.


Yet the campaign to liquidate illiteracy awoke a thirst for knowledge on the part of newly literate readers. A poor peasant sent a letter to the Peasant Newspaper: 'Send me a list of books published on the following subjects because I am interested in everything: chemistry, science, technology, the planets, the sun, the earth, the planet Mars, world maps, books on aviation, the number of planes we posses, the number of enemies the Socialist Republic has, books on comets, stars, water, the earth and sky'.

Lenin - Will the Bolsheviks Maintain State Power?
Serge - Year One of the Russian Revolution
Smith - Red Petrograd
Cliff - The Darker the Night, the Brighter the Star: Trotsky 1927-1940
Lewin - Russian Peasants and Soviet Power

Posted by Resolute Reader at 8:14 pm