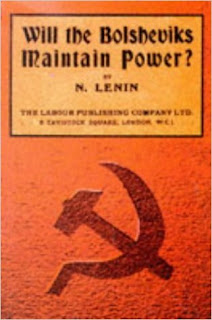 Written just a few days before the October Revolution of 1917 when the Provisional Government was finally evicted from office and Soviet Power became the sole ruling body across Russia, this is a powerful and fascinating read. Lenin writes polemically with the confidence and authority that comes from being the leader of a mass revolutionary organisation numbering more than 250,000 members and supported by millions more ordinary workers, peasants and soldiers.

In the opening pages Lenin tackles those from the left and right who argue that a Soviet government cannot work and that workers are not able to run society. He answers these arguments clearly, in a language that's not marred by academic phrase-mongering but is designed to win over ordinary people to his argument. Lenin is persuasive and at times funny, but most importantly he's also urgent. The time for argument is over, now is the time for action. In part this reflects an argument with those to the right of the Bolsheviks and the Soviet majority, but it is also a polemic with those who are vacillating within the Bolshevik party itself.

Despite it's short length, there is much here of interest. Such as Lenin's suggestions about how a socialist society could function, and how it might, for instance, deal with problems such as the lack of technical skills:


The rich must receive from the union of workers or clerks which is most nearly related to their sphere of activity and employment book, They must receive weekly, or at any other regular periods, a certificate from this union that they are doing their work conscientiously - without this they will not get their bread card or food products in general. We need good organisers in the banking business and in the work of unifying various concerns (in these matters the capitalists have more experience and work is done more easily with experienced people)... We shall give all such workers work in accordance with their strength and ability.

What shines through from his writing is an absolute faith in the ability of ordinary people to make the revolution and to run society.


The most important thing is to instil in the oppressed and labouring masses confidence in their own power, to show them by actual practice that they can and must themselves undertake regular, most strict, orderly, organised distribution of bread... milk, clothing, dwellings and so on, in the interests of the poorest.... an honest, courageous, universal first move to hand over the management of the country to the proletariat and semi-proletariat will cause such an unheard of revolutionary enthusiasm in the masses, will multiply so many times the popular forces in the struggle... that much that seemed impossible to our narrow old bureaucratic forces will become practicable for the million-numbered masses, beginning to work for themselves and not for the capitalist, not for a boss or official and not under compulsion of the stick.

Lenin defends the need for revolution, not simply to sweep away the old, corrupt, imperialist order, but also to allow the full liberation of working people. If you've only read Lenin's theoretical writings, this is a revealing book - a revolutionary leader, in the midst of mass revolution talking to ordinary people about how they can change the world. Its definitely one to read, or re-read in the centenary year of 1917.

Lenin - The Proletarian Revolution and the Renegade Kautsky
Krausz - Reconstructing Lenin: An Intellectual Biography
Cliff - All Power to the Soviets, Lenin 1914-1917
Serge - Year One of the Russian Revolution
Posted by Resolute Reader at 9:26 pm