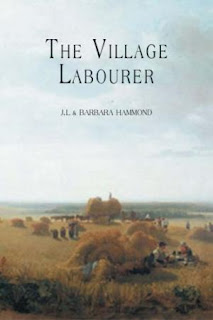 J.L. Hammond and Barbara Hammond's trilogy of books, collectively titled The Labourer looms large over any English historical studies of the period from the mid part of the 18th century to the early years of the 19th century. This was a period of tremendous economic and political change, covering the mass of Parliamentary enclosures, the industrial revolution and the great battles for Reform.

The first volume The Village Labourer, deals with the impact of enclosure on village life and some of the rural resistance that took place. In isolation from the other works it feels like it is missing some parts, so the narrative skips the Luddite rebellion and moves directly to the Machine-Breakers of the 1830s. Confusing, until you realise that Luddism is dealt with in a later book. Much of The Village Labourer deals with the question of enclosure, some detailed appendices list the parliamentary reports and discussions about specific occurrences and are very interesting to read.

This part of the Hammonds' work is possible the part that receives heaviest scrutiny, some of which is dealt with by the authors in an updated introduction, but can be boiled down to the criticism that the Hammonds generalised far too much from a few examples and painted a portrayal of the violent consequences of enclosure that far exceeded reality. I think the authors defend themselves well enough, but should readers want to read more on the debates they might be interested in Michael Turners' Parliamentary Enclosures which summarises the criticisms of the Hammonds and the counter-arguments, and reaches the conclusion that the Hammonds were not too far from the mark as has been suggested, if not for their original reasons.

That said, the Hammonds do describe a reality. At the beginning of the period discussed the rural labourer and farmer were little more than peasants, in no way free to farm their strips of lands as they would like, reliant on a historical right to use the common and waste land that was associated with the farming of strips and suffering under the whim of the lord of the manor. By the end of the period,

Cottagers were a slightly better off group of villagers than many, but the consequences were the same. Enclosure of land deprived the community of the rights that enabled them to survive. The Hammonds quote a contemporary in Norfolk who explains


I was informed that a gentleman of Lynn had brought that township and the next adjoining to it: that he had thrown the one into three, and the other into four farms; which before enclosure were in about twenty farms: and upon my further enquiring what was becoming of the farmers who were turned out, the answer was that some of them were dead and the rest were become labourers.

This neatly sums up the main point of the Hammonds argument, that enclosure was a economic process that the wealthy used to consolidate their land and property in the rural areas and the consequences were disastrous for large numbers of people who ended up becoming wage labourers in either rural or urban areas. The lose of rights such as access to common land, the right to collect firewood and gleaning were disastrous. The Hammonds have plenty of tragic stories to move the reader, but consider some of the economic points they make. Gleaning, the right to collect the grains that had been missed during the harvest, could for some families represent six or seven weeks wages. A staggering amount of income that lost that would have meant the difference between life and death to many. In consequence,


the labourer who now lived on wages alone earned wages of a lower purchasing power than the wages which he had formerly supplemented by his own produce... the normal labourer even with constant employment, was no longer solvent.

This obviously created a very real problem of poverty and hunger in the rural areas and two responses to this are dealt with by the Hammonds in the remainder of the book. One of these was the Speenhamland system eventually adopted by the government across the country. This created a minimum scale of wages linked to the price of bread which was supposed to be supplemented by the parish if wages dropped too low. In reality, the new capitalist farmers simply lowered wages and were subsidised by the community. Rather tongue in check, the Hammonds conclude that the


Speenhamland system was a safety value in two ways,. The farmers got cheap labour, and the labourers got a maintenance, and it was hoped thus to reconcile both classes to high rents and the great social splendour of their rulers. There was no encroachment on the surplus profits of agriculture, and landlords and tithe-owners basked in the sunshine of prosperity.

The other response was the resistance of the poor. The authors argue that the first sign of this response was the rioting of 1816, though I think its fair to say that the Luddite machine-breaking of 1811 onwards cannot be separated from the general economic conditions. Even though this was not rural rebellion, it was by workers still very close to rural communities. None the less, the riots and the renewed rebellion of the 1830s were part of a resistance to a system that ended up benefiting only the wealthy. There was also other resistance, as the poor tried to find ways to survive in the workhouse and get more from the parish. But these, by and large, were difficult and painful years for the bulk of the rural population.

The Swing protests of 1831 shook the government, in a period of general agitation for Reform. The putting down of the rebellion and the appalling sentences meted out to those found guilty of protest form the latter part of The Village Labourer. Over a century since the book was written and nearly 200 years since the events themselves, the accounts of teenagers transported to Australia, the execution of men guilty of only protesting to protect their livelihoods and the cruelty of a court system that preached liberty, but prevented the poor having a voice, has the power to shock. Evidence about distress caused by low wages or unemployment was consistently ruled out of order, as though rural riots could be explained without these factors.

The defeat of the Last Labourers Revolt was a turning point for the English economy. But it wasn't the end of resistance to the system, it was, in many ways the beginning. The Hammonds' book deserves reading today, in part because of its excellent approach to history, but in the main because they describe in detail the origins of the modern British economy - the result of a protracted class war that was won by the rich and powerful, who created a new world in their interests.
Posted by Resolute Reader at 9:07 pm