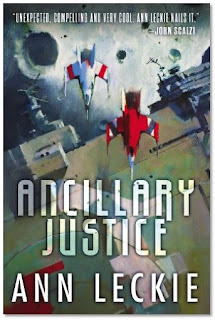 Ann Leckie's Ancillary Justice and its sequels have been showered with praise. They've won a bunch of rewards and rave reviews from almost everywhere. So I was disappointed to find that I found the first in the series very difficult. Part of the problem is that in sections of the books the characters are split into multiple persons. Each of these carries, and communicates with the others, yet retains an independence from the whole. It must have been hell to write, but its hell to follow. I'm wary of spoiling it for future readers, but I could not work out at points who was who.

Leckie's ideas deserved better. The idea of a former Ship's AI, used to having sensory input from thousands of simultaneous sources and being simultaneously in numerous different locations, suddenly reduced to a single entity could have been brilliant. But I found the pacing, the characterisation and the dialogue wooden and unbelievable. Clearly Ann Leckie has dozens of fans, but I almost gave up on several occasions, and I won't be getting hold of the sequels. Nice cover art though.
Posted by Resolute Reader at 9:29 pm

I knew I'd eventually find something important to disagree with you about. I found Ancillary Justice to be well-written, innovative, thoughtful and exciting -- so much so that I immediately bought the sequel and read it in a day, then fretted for months waiting for the third volume. If you are a science fiction fan, I recommend it. If not, well chacun a son gout, I guess ...

I loved this book and the whole series! It made me fall i love with space operas all over again. Sorry it didn't jive with you.