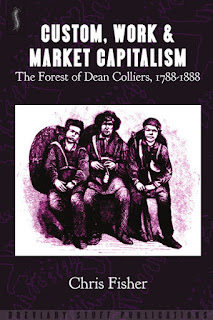 Over the last year I've reviewed a number of books that look at the impact of the transition from feudalism to capitalism on ordinary people. A number of these are well known works such as Christopher Hill's Liberty Against the Law or the more recent Rethinking the Industrial Revolution by Michael Zmolek. Chris Fisher's book is less well known and deals with a relatively small geographical area and an unusual set of economic circumstances. This however does not diminish its importance for those trying to understand the development of the capitalist mode of production, and in particular, what that meant for the rural population.

In the 17th and 18th century, the Free Miners of the Forest of Dean had, or believed they had, a set of rights handed down from the distant past, to use the forest and its natural resources for themselves. While they were coal miners, they also needed the wood from the forest for fuel and for the building of the mines and the land also provided food, grazing and other opportunities.

In turn they paid taxes to the Crown for the right to work. The miners were fiercely protective of their situation. Those from outside the Forest were known as "foreigners" and could not easily become part of the mining community - having to serve a seven year apprenticeship unlike the two year term from those born in the Forest. The rights that they fought for were written down in the curiously named "Book of Dennis" from an inquisition in 1610 and listed "what the Customs and ffranchises hath been that were granted out of minde and after in tyme of the Excellent and redoubted Prince King Edward unto ye miners of the fforreste of Deane". It asserted the right to mine "every soyle of the King's of which it may be named and alsoe of all other folke without withsaying of any man". Other rights, such as the building of roads to facilitate this work were also listed.

Chris Fisher argues that two rights in particular became controversial in the nineteenth century. The first was the limitations on "foreigners" and secondly the right the miners had to be tried before their own courts within which no foreigner could take part. These courts judged internal matters, but also "limited entry to the industry". These rights severely limited the ability of outside interests to profit from the natural resources of the Forest of Dean. As Fisher explains,


The free miners' rights were use rights not real estate: they accrued to individuals and were contingent upon birth in a defined area and work in the mines for a defined period. The individual who met those tests had the right to use the coal, to dig it up and sell it, but could not alienate the right from himself or transfer its benefits to others.

A capitalist sinking a pit had no guarantee that someone else would not sink another so close to his own as to render both worthless. For foreigners and Crown alike it was desirable that the free miners' claim to an exclusive right to the coal be eliminated altogether.

Thus Parliament began a process to undermine and eliminate the ancient rights. They began with an Act in 1838 that subtly altered who had the right to mine in the Forest and "recognised property rights". This fundamentally changed how the Forest could be used. There were other strategies too. Missionaries were sent into Forest communities from about 1800, a process of "religious colonisation". This led to important changes, as one group of Methodists colliers wrote:


We no longer lay claim to his Majesty's timber or deer, nor do we attack and murder his keepers. The rising plantations grown unmolested and our neighbours' flocks graze around us unassailed.

Many however did not agree to the changes and there was a long process of resistance. This included protests, petitions, riots and the pulling down of enclosures and fences. Some miners, Fisher points out, did want change and supported the building of railways to facilitate mining, others were violently opposed. One thing is particularly notable though. As capitalist methods of mining and employment increased within the Forest, anger at the consequences of wage slavery meant many saw the old rights in a new way, and began to struggle for their restitution. A major riot in 1831 for instance in the context of national struggles for reform, was "first and foremost, an attempt top reassert against the crown what the miners believed to be their rights in the Forest". A contemporary news report put it "the war word, as usual, is the restitution of rights, which the foresters complain have been wrested from them by the Crown".

These struggles continued for decades. The latter half of the book focuses on the fight by the miners to establish trade unions and win better pay and conditions. But the backdrop to all of this was the need for the Crown to replace the old rights with new ones that allowed it to be "unhindered in dealing with its properties through sale, lease or any other form of use for profit". This mean "changing the basis of property ownership in the Forest". Fisher argues that this was a struggle by the Crown in which the State was an autonomous actor, he argues


It would be misleading to see the process of change in the Forest as one in which a capitalist class of coal-owners, or a State servile to them, unilaterally, re-ordered affairs to their own advantage. The State had its own properties and interests to defend and they were separate from those of the [coal owners].

I think this is a misunderstanding of the role of the state in society. Instead the state is the embodiment of ruling class interests. This is not to say there is a clear set of priorities agreed by the whole ruling class, but that they do have a common interest. The destruction of rights and the creation of a system that facilitated profit was one that united the coal-owners and the Crown. The State was not a separate entity balancing this with the interests of the miners, rather it ruthlessly helped drive the change through.

Over time this changes, and some miners' may have bought into the new order out of frustration with the status quo, or a desire to improve their lot. Fisher highlights the changes "The Earlier quarrel was about which principles should govern the ownership and exchange of properties. The later was about the distribution of property and profits". Fisher is absolutely right to conclude however, that whatever the basis for some of the changes the ordinary people felt they were being robbed, and were prepared to resist. This "gave a force to talk about working-men's representation and about the inequalities of British society which might not otherwise have been made".

The struggle to defend customary rights illuminates to aspects to the history of capitalist development. It shows the very different ways that pre-capitalist society could organise, and how the new order would drive through change in the interests of a new, minority class. These changes came as a major shock to the mass of ordinary people who, as in the case of the Forest of Dean colliers, often reached back into their own histories and their own interpretation of their rights for ammunition to resist. Thus these struggles were simultaneously about shaping the new order, while looking backwards. But things could never be return to how they were, though the future could be written in new ways.

Chris Fisher's book is a detailed look at a near forgotten part of that history. Its focus on a small part of British geography and history, in a unusual set of circumstances, actually illuminates wider changes. It is to be recommended to those trying to understand what capitalism has done to our communities and how our ancestors resisted.