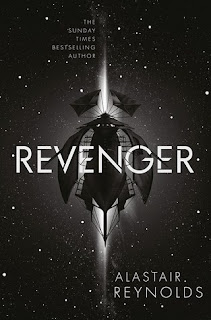 Alastair Reynolds is the master of big themes in science fiction, so its nice and somewhat surprising that his latest book, Revenger, takes place on a much smaller scale. Closer to a more traditional space adventure, its premise feels closer to some early twentieth century's pulp science fiction, but updated for the new millennium.

In a universe very different from Reynolds' Revelation Space, this is a setting that is only gradually revealed to us. In fact Reynolds keeps a lot hidden, leaving our imaginations to fill in the gaps. Humans inhabit a small part of the galaxy, on planets and habitats that have been left over from early generations. Floating around space are the alien artifacts which contain technologies that can make fortunes. These only open periodically, and giant space going vessels ride ion drives and solar winds to rendezvous with the booby trapped baubles.

The novel draws heavily on pirate themes - and while set a long time in the future, with advanced technologies, this is a tale ship to ship battles, hand to hand fighting below decks and a fabled pirate queen trying to steal everyone's treasure. It all seems, as you write it down, faintly ridiculous and only Reynolds' brilliant story telling can hold it together. Its fun, readable, and exciting, and, dare I say it, would appeal to the young adult audience as much as Reynolds' older fans. Unusually for science fiction it also has two young female heroes which makes it even more attractive as a present for a science fiction fan looking for something out of the ordinary.

I haven't always been impressed by Reynolds' excursions from Revelation Space so I'm really happy that this is as good as it is.