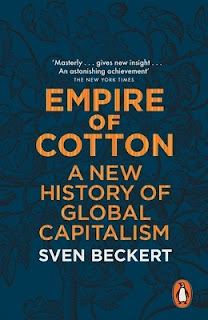 This is a highly important book that any student of capitalism should read. It locates the cotton industry at the heart of the development of capitalism and the creation of a world proletariat. Sven Beckert charts the different stages of cotton capitalism to demonstration both the development of the economic system and the growth and decline of various national components. It's a readable, at times shocking, introduction to the role of cotton in our history. Beckert answers the question about the uniqueness of cotton early on:


cotton... has two labor-intensive stages-one in the fields, the other in factories. Sugar and tobacco did not create large industrial proletariats in Europe. Cotton did. Tobacco did not result in the rise of vast new manufacturing enterprises. Cotton did. Indigo growing and processing did not create huge new markets for European manufacturers. Cotton did. Rice cultivation... did not least to an explosion of both slavery and wage labor. Cotton did.... cotton provides the key to understanding the modern world, the great inequalities that characterize it... the every-changing political economy of capitalism.

Cotton has a long history, but as the above quote suggests, it's importance exploded as capitalist relations of production grew. Simultaneously the spinners and weavers who produced it became enmeshed in a vast network of merchants and trade, manufacture and sales. In a variety of different places around the globe cotton industry grew and began to transform rural economies. But, as Beckert argues, in the "premodern world" there were barriers to this breaking out into a new social order.

The cotton industry in Europe was dependent on imports of raw cotton, but over two hundred years, European cotton was to come to dominant the globe, reshaping domestic cotton outside of Europe in its own image, helping to subsume whole continents into colonies and driving millions of people into poverty and slavery. These changes


were the first steps towards the Industrial Revolution. Centuries before the "great divergence" of per capita economic output between Europe and East Asia, a small group of Europeans seized control of the heretofore episodic and gradual process of forging global economic connections, with dramatic consequences... The "great divergence" was at first a divergence of state power as well as a peculiar relationship between these states and capital owners. In the process, the many worlds of ctton became a European-centered empire of cotton.

Beckert calls this "War Capitalism" aptly summing up the violence by which European capital trampled over the rest of the globe's people and economies, in its own interest.

While the author doesn't call himself a Marxist, this is work clearly influenced Marx's understanding of the dynamics of capital. Central to the story is that of the constant reinvention of capitalism. Notable for instance, is the discussion of slavery and the tremendous impact on cotton, and hence capitalism, caused by the American Civil War and the emancipation of the slaves. I was disappointed that there wasn't more here about the role of Lancashire cotton workers in their solidarity with the North's war against the South, but nonetheless this is a detailed exploration of how that victory transformed global relations and its impact on, and through, the cotton industry.

Beckert doesn't neglect the resistance to capitalism. He covers the resistance of the slaves, the cotton workers, the machine breakers and so on. He also discusses the way the "capitalist social relations" transformed the countryside and rural relations.  One fascinating point he makes is that it is surprising that cotton growing developed in most parts of the world without slavery. This was solved through the development of new forms of social coercion:


The problem that had vexed cotton capitalists since the 1820s, namely how to make non-enslaved rural cultivators into growers of cotton for world markets, moved toward a resolution that seemed to please the interests of European and North American cotton manufacturers and statesmen... What all these struggles to recast the global countryside had in common was that states now played an important role. New forms of coercion, instituted and carried out by the sate replaced the outright physical violence... so important to slave labor. This does not mean that physical violence was absent, but it was secondary compared to the pressures that came from contracts, the law and taxation.

The book finishes having charted the growth of European and US cotton capitalism, with its decline and the emergence (or re-emergence) of Asia as the dominant force for this essential commodity. This is a rich work of history, nuanced and detailed, as well as politically very important. It deserves a wide readership and I look forward to seeing what the author produces next.