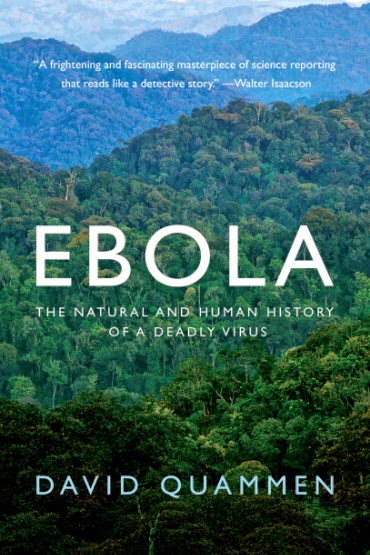 The Ebola crisis that raged over the summer produced acres of newsprint. Much of it was sensationalist, inaccurate and confusing. Many people were concerned, not least because of irresponsible reporting. Some were quick to point out that the media only became interested when white people in rich nations started dying and Socialist Worker highlighted the way that "The Rich Could Stop Ebola in a Day".

Ebola is a horrible, virulent disease. But despite it having first identified following a 1976 outbreak, we still know very little about it. One reason for that, as Socialist Worker highlighted, is the lack of resources that have been spent on solving the problem. Another is the particular way that Ebola spreads.

David Quammen's new book concentrates on this second question. His book has its origins in a 2012 book of his, Spillover which examined the way that diseases can arrive from the animal kingdom and enter the human population. The Ebola pathogen is a zoonosis, "an animal infection that is transmissible to humans". Quammen points out that this is not uncommon - diseases like bubonic plague or rabies are zoonosis.

The reason that this is important is that identifying the "reservoir" animal which carries Ebola between outbreaks is a key part in identifying how to deal with the disease. The reservoir is unknown, though recently it has become clear that bats may well have a key role in this. Bats are extremely common in areas where Ebola outbreaks occur.  However at the time of writing, Quammen acknowledges that no bat has ever been found, despite extensive research, containing live Ebola viruses. This might mean that bats are part of a much more complex Ebola ecology (we know for instance that Ebola is particularly virulent in Gorillas) or it may be that some bats are the reservoir. More research is needed.

Ebola usually causes a horrible death. Though when the communities are in Africa we rarely hear about them, which was why I was surprised to find out from Quammen's book that 1976 was the first known case of an outbreak. I was also surprised to learn that several casualties have occurred outside of Africa long before the 2014 outbreak. England had a patient in 1976 who had contracted it due to an injury while studying the disease. A Russian researcher who had been looking at an experimental therapy derived from blood serum of horses died in 1996. Injecting live horses with Ebola must have been a particularly dangerous piece of research activity.

I was fascinated to discover that an African group, the Acholi, had, as part of their cultural knowledge, "a program of special behaviours" some of which seem specifically aimed at coping with diseases like Ebola. Including "quarantining each patient... relying on a survivor of the epidemic (if there were any) to provide care to each patient; limiting movement of people between the affected village.... not eating rotten or smoked meat; and suspending the ordinary burial practices"

Most importantly though, Quammen locates the Ebola question in the wider social context. He points out for instance, that there are other, far more dangerous diseases (malaria, or TB), others that could well evolve and cause extensive destruction (bird flu). There are others that cause localised epidemics, that are ignored in the west. All of these would benefit from proper funding, and are made worse by Africa's general poverty and the legacy of western colonialism. As Quammen points out:

What we should remember, is that the events in West Africa (so far) tell us not just about the ugly facts of Ebola's transmissibility and lethality; they tell us also about the ugly facts of poverty, inadequate health care, political dysfunction, and desperation in three West African countries, and of neglectful disregard of those circumstances over time by the international community.

Quammen's book is not perfect, its main limitations come from its origin in a book with a slightly different emphasis. But it is an excellent introduction to Ebola. It should also encourage us to demand that our governments spend more of researching diseases like Ebola and caring for their victims.