Leandro Vergara-Camus - Land and Freedom: The MST, the Zapatistas and Peasant Alternatives to Neoliberalism 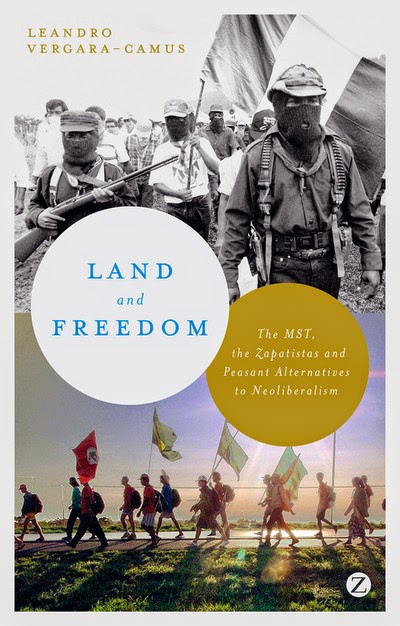 Over the last decade the Zapatista movement in Mexico and, to a lesser extent, the Movimento dos Trabalhadores Rurais Sem Terra (MST) in Brazil have been inspirational examples of rural and peasant movements. The MST's occupations of land, or the Zapatisa's defence of indigenous peoples land and both groups' attempts to develop new economic and social paradigms have inspired and provoked debate for many on the anti-capitalist left.

Thus Leandro Vergara-Camus' new book, which comparatively analyses the two movements, is very important. From my point of view I found it particularly interesting at a time when the question of peasant struggles and rural movements has receded somewhat from discussion among Marxist activists. Both the MST and the Zapatistas are important because they are both contemporary movements and their struggles and strategies may offer insights into wider peasant movements in more revolutionary times.

Much of the authors' work is based on years of research which included extended periods living with, and interviewing both MST and Zapatista activists. The MST is a movement of landless workers that attempts through a process of occupations to win land for those who don't have it. It begins with a preparatory period prior to land occupation, followed by a hopefully successful occupation, then by entrenchment of a new community. The Zapatistas, while aiming to control rural space as well, have tended to protect established communities, expelling Mexican state forces and, where necessary, being prepared to mobilise peasants and their own military forces to protect this control.

"The land struggles of the MST and the EZLN are not struggles demanding that elites live up to their mortal obligations towards their subordinates. On the contrary, both movements seek to fundamentally transform or even transcend that relationship by empowering their membership through the creation of 'autonomous rural communities'.... These... allow their members to secure and protect their access to land and hence resist the full commodification of land and monetarization of relations of production."

Vergara-Camus suggests that for the Zapatistas this has not meant the expansion of commercial agriculture, by which he means an integration into a wider capitalist economy, but instead what can be seen is a

"'retreat movement' towards subsistence agriculture and activities. More and more peasants, particularly in indigenous regions of the jungle, the highlands and the north, are retreating as much as possible, from commercial relations - dedicating only a minimal portion of their activity to this purpose."

While MST communities are often more integrated into the wider economy, he continues,

"the majority of Zapatistas are subsistence peasants and fewer can be found within the ranks of market-dependent indigenous peasants."

While there are similarities between the two movements, Vergara-Camus notes important differences.

"Even though both are facing the historical process of so-called primitive accumulation, they are confronted by different phases of this process. The militants of the MST are responding to the development of fully capitalist social relations in the countryside, while the Zapatista communities are fighting the mere establishment of the conditions for the development of fully capitalist relations."


Elsewhere in my reviews I have mentioned my admiration for the analysis of Henry Bernstein, who argues that "most peasants in the Third World, like their family farmer counterparts in the West, 'are unable to reproduce themselves outside the relations and processes of capitalist commodity production'." [Vergara-Camus quoting Bernstein].

Vergara-Camus explicitly moves away from this position, arguing that the "subsistence focus" of both the Zapitistas and the MST is a consequence of both "socio-economic" positions and (particularly in the case of the Zapitistas) because the indigenous approach to production emphasises the question of subsistence farming. Writing about the MST, Vergara-Camus suggests that once settlement has occurred, "subsistence remains a focus because market conditions do not allow them to compete with more productive farmers. More importantly, MST settlers are not subject to the full imperative of competition because their land is, most of the time, not commodified."

While it is undoubtedly true that both MST settlers and Zapitista communities are physically and economically isolated from wider capitalist relations, I don't think that this necessarily means they are completely cut off from capitalism. This is not simply about whether or not they buy goods such as pesticides or clothing from external companies, though this is important, it is about whether or not the communities are entirely able to break with the realities of capitalism itself.

One example of this is the question of gender roles within both the MST and the Zapatistas. The collective action of the peasants has helped to break down the subordinate role of women. This is precisely because the involvement of women directly in the struggle has challenged traditional roles and "temporarily blurred the boundaries between private and public spaces". However it is notable that neither movement seems to have attempted to fundamentally challenge these gender roles through, for instance, collective arrangements for food production and child care.

Clearly in both examples, while men and women's traditional roles have sometimes changed, they haven't been transformed. Notably, Vergara-Camus points out, that while in the MST preparatory phase, women and men's roles change radically, once land occupation has taken place, they often revert to more traditional positions. This is not always the case, and the author quotes some inspiring examples of how fundamentally things have changed, while noting that this had to be fought for, as one activist remembered

"The participation of women was fought for. It was conquered. It had to confront many stereotypes. Today, it has changed a lot. There are many women who have achieved the division of domestic chores."

But, the author notes

One of the truisms of the revolutionary left, is that people change in struggle, and that is clearly the case here. But when the struggle diminishes, or fundamental change fails to occur than things can revert back to how they were. Precisely because neither the MST or the Zapatista movement can break from capitalist relations they risk things reverting back.

A second and more fundamental question is that neither of the MST or the Zapatista strategies challenges the power of the state. While it has been fashionable for some leftist scholars to suggest that it is possible for radical movements to not challenge state power, for peasants in Brazil and Mexico, the existence of a hostile state which remains supportive of large landowners can mean death squads, military intervention or simply barriers to selling produce in the wider market. 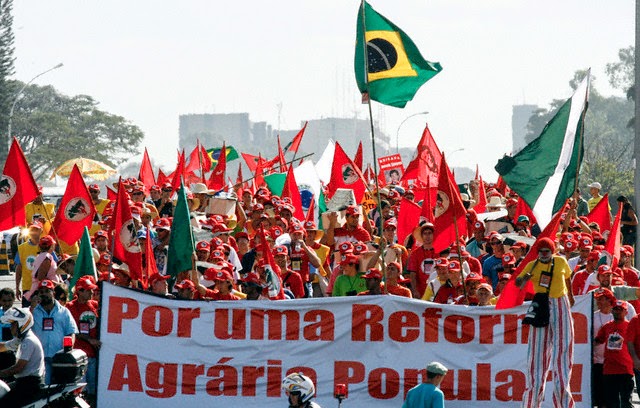 The importance of this debates lies in whether it is possible for others to emulate this strategy and
create anti-capitalist islands within a wider capitalist sea. While the creation of communes or co-operatives is often doomed to failure in the face of the logic of the market, because peasant communities can reproduce themselves through subsistence farming it is possible for them to exist in economic relations outside of the capitalist mainstream. But the long term limitations lie precisely because capitalism itself, with its inherent need to expand, will eventually come into conflict with these spaces.

This makes the wider links between the MST and the Zapatista movements with their respective nation states even more important. The MST has famously developed over years close links with Brazil's ruling party the Workers' Party (PT). The PT was elected with a mandate to bring change, but has ended up introducing neo-liberal politics and certainly hasn't provided the rural reforms that many in the MST would have hoped for. Indeed, some of their changes have strengthened the larger agricultural corporations and landowners that the MST is in conflict with.

In Mexico the Zapatista has bravely stood its ground against extremely aggressive state action. Vergara Camus analyses in some detail the attempts, particularly by the MST to build wider coalitions. These haven't been successful, and it remains to be seen how the MST and the Zapatistas will move forward.

But the key question must be the way that both groups have inspired and encouraged wider social movements. Vergara-Camus points out how, in 1994, in the aftermath of the Zapatista uprising communities throughout Chiapas took the opportunity to occupy private land. The MST too, has through its occupations and its colleges and other institutions given land to those who most needed it, and helped encourage the new settlers to make best use of it. Tens of thousands of people have had their lives transformed as a result. In an era when neo-liberal policies have run rough-shod over wider rural relations this is in itself both inspiring and hopeful.

Vergara-Camus notes that the "principal political advantage" of the MST and Zapatistas is "their capacity to organise and mobilise entire communities around autonomous structures of popular power" and "their maintenance of a subsistence fall back strategy that provides an opportunity to partially delink from the market".

While often using the language of revolution, neither organisation is revolutionary in the sense that they wish to bring fundamental social change through the destruction of the capitalist order. Vergara-Camus notes that "by developing popular structures of power" the MST and the Zapatistas do alter the relationship between rulers and ruled. But he also realizes that "power relations do not dissolve through this process" - as we have seen with the examples of changing gender roles in both the MST and Zapatistas.

Vergara-Camus suggests that the only other option is a "political strategy", but he equates this with engaging in the existing capitalist political structures on the terms of those who already have power. I fear that this is inadequate and will expose the weakest flank of these movements to co-option or destruction. The alternative is a strategy of developing and furthering links with wider social forces, particularly the working class of the Mexican and Brazilian cities that have enormous social power. Here lies the potential to destroy capitalism and allow the rural areas to develop unhindered by the wider capitalist sea.

This has been a somewhat critical review of what is an important book. At times it is not an easy read. The chapters discussing the politics and economics of the peasantry seemed needlessly academic and the authors' use of Gramscian metaphors seemed shoe-horned in. I was also disappointed that more of the author's material from interviews with the activists of the MST and Zapatistas was not included. Nonetheless, despite my disagreements with key issues in Land and Freedom the debates within are ones crucial to both the future of the peasantry and those who seek to fundamentally change society. This book deserves be widely read and to be the focus of extensive debate.

Sader - The New Mole: Paths of the Latin American Left
Galeano - The Open Veins of Latin America
Sader & Silverstein - Without Fear of Being Happy: Lula, the Workers Party and Brazil
Posted by Resolute Reader at 9:42 pm