R.H. Tawney - Religion and the Rise of Capitalism 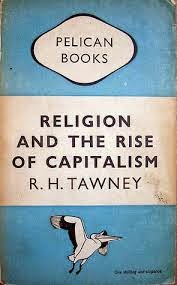 R.H. Tawney was a social historian and christian socialist. He is best known for this book, though his career was wide-ranging and fascinating. I found, while looking into his life, this powerful account of his experiences going "over the top" at the Somme and being wounded in action. An experience that no doubt helped shape his later politics and activism.

Religion and the Rise of Capitalism is however not an easy read. In part this lies I suspect in its origin as a series of talks. More problematic is the author's extensive and detailed references to religious ideas, people and contemporary academic work. At times it is hard to follow his line of argument or understand, without this knowledge, the point he is making.

That said, there is much of interest in here to the reader trying to understand the development of capitalism in western Europe, particular the British Isles.

Tawney begins by discussing the role of religion in the pre-capitalist, feudal world. As he explains,

"In the earlier Middle Ages it had stood for the protection of peaceful labour, for the care of the poor, the unfortunate and the oppressed - for the ideal, at least, of social solidarity against the naked force of violence and oppression. With the growing complexity of economic civilisation, it was confronted with problems not easily handled by its traditional categories."

But religion in the medieval era was also a justification of the status quo. That everyone had their station in life and was expected to work in that role for the benefit of a whole. Thus religious figures tried to interpret and understand the Bible to both guide people, and back up their world outlook.

In terms of economics, the key question for the church was usury - the idea that interest could be charged on loans, or profits made from lending. Tawney traces the way that the Church's attitude to usury changed through time, banning clerics from profiting like this, then refusing usurers communion or Christian burial. But as capitalist relations developed within Medieval society, as wage labour grew and money came to dominate economic relations the old conservative approaches to economic relations no longer fitted the reality.

"In England... the new economic realities came into sharp collision with the social theory inherited from the Middle Ages. The result was a reassertion of the traditional doctrines with an almost tragic intensity of emotion, their gradual retreat before the advance of new conceptions, both of economic organisation and of the province of religion, and their final decline from a militant creed into a king of pious antiquarianism. They lingered, venerable ghosts, on the lips of churchmen down to the Civil War. Then the storm blew and they flickered out."

The changes that the rise of capitalism brought meant that religion had to adjust. This didn't simply mean changing the approach to questions like the charging of interest on loans. It also mean a complete re-write of the moral code that formed the basis of Christianity.

"In spite of the sincerity with which it was held that the transaction of business must somehow be amenable to the moral law, the code of practical ethics, in which that claim was expressed, had been forged to meet the conditions of a very different environment from that of commercial England in the seventeenth century."

Tawney traces the changes that took place within religion as different interpretations of Christianity struggled to adapt and understand the new world order. In particular he focuses on Puritanism, which "became a potent force in preparing the way for the commercial civilisation which finally triumphed at the Revolution".

For the Puritans, "religion must be active, not merely contemplative..... 'God hath commanded you some way or other to labour for your daily bread'." In other words, this was a religion that justified trade, commercialism and ultimately profit. As Tawney writes,

"a creed which transformed the acquisition of wealth from a drudgery or a temptation into a moral duty was the milk of lions. It was not that religion was expelled from practical life, but that religion itself gave it a foundation of granite... The good Christian was not wholly dissimilar from the economic man."

The transformation was so great, that as Tawney points out, those who held to the old texts were persecuted. The Rev. David Jones was was "so indiscreet as to preach... against usury, on the text, 'The Pharisees who were covetous heard all these things and they derided Christ,' [found] his career in London was brought to an abrupt conclusion."

Tawney tells the story well and the book is most useful for the historic account. I didn't find that Tawney got to the bottom of why attitudes began to chance. In part, I think, the answer lies with the fact that the Church was not so benevolent - but itself was enormous wealthy. Religious ideas needed to reflect reality, or risk becoming irrelevant. In addition, as Marx wrote, "being determines consciousness" - reality of working and relating in capitalist ways to other people and nature at large meant that peoples ideas changed. Most people expressed these through religion and so new interpretations of the Bible and religion became common. This is why, during the upheavals of the English Civil War, myriads of religious sects and groups appeared and pamphlets discussing the world, religion and the church were written in their thousands.

Tawney's style is beautiful and poetic which means the reader can be enjoy this book on many levels. While Tawney's thesis may not be one hundred percent accurate for the Marxist trying to understand the rise of capitalism (perhaps it is better described as incomplete) there is plenty of food for thought here that those trying to understand the modern economic system (and the role of the Church within it) can engage with.

Siegel - The Meek and the Militant
Bolton - The Medieval English Economy
Posted by Resolute Reader at 8:00 pm

Top review. I totally had the same problem with trying to read it - there are a few other books that seem to be based on talks with little effort made to convert them to a format more palatable to the reader, but there's still lots of really useful stuff in it.

That was really helpful. I have picked up this book recently and had troubles getting on with it. Your review helps put things into perspective.