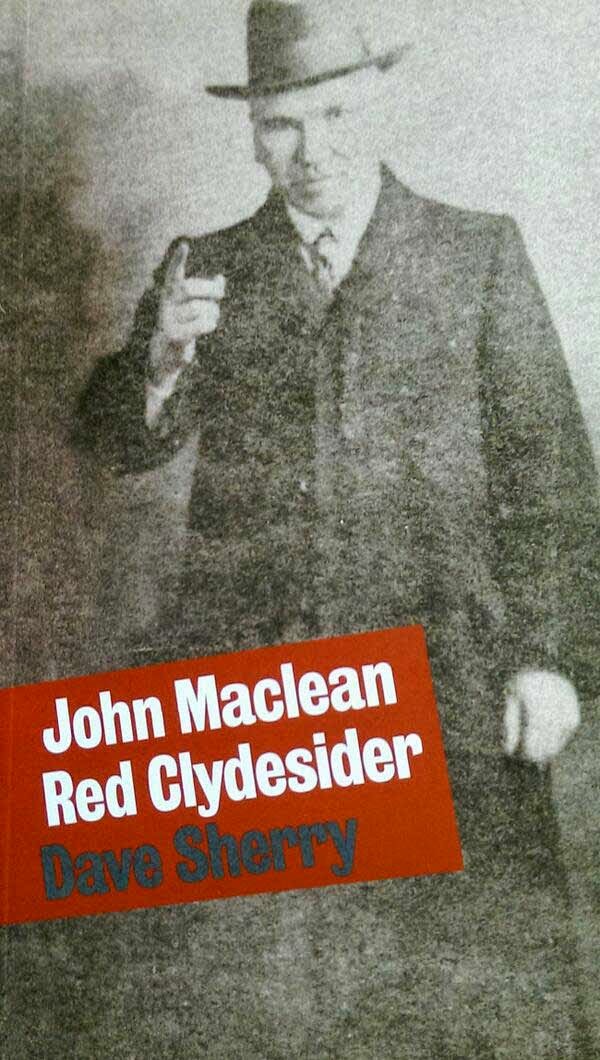 The UK's commemoration of the centenary of the start of World War One has so far mostly focused on the same old tired stereotypes of a country united behind the flag. This short book by Scottish socialist Dave Sherry however tells a very different story. It looks at the life of one of the most important revolutionary socialists of the early 20th century, and through his story demonstrates that there was often a very different mood amongst workers during World War One.

John Maclean is almost forgotten today. He died, tragically young, at 44. His life undoubtably shortened by the prison sentences for seditious behaviour. Maclean was not one to deny the charge. Facing five years hard labour in May 1918, in one of his most famous speeches from the prison dock, Maclean famously declared:

"I am not here as the accused - I am here as the accuser of capitalism dripping with blood from head to foot... in 15 years time from the close of this war we are into the next war - if capitalism lasts we cannot escape it. My appeal is to the working class. I appeal exclusively to them because they, and they alone can bring about the time when the whole world will be in one brotherhood, on a sound economic foundation... That can only be obtained when the people of the world get the world and retain the world."

Maclean was a threat to the British establishment because he was one of the acknowledged leaders of some of the country's most powerful workers. Those employed in the enormous factories of Glasgow adopted Maclean as one of their own. A school-teacher until he was sacked for his anti-war agitation, Glasgow's workers organised a levy to ensure that he could be paid to continue organising.

Dave Sherry illustrates how, cut off from the continental revolutionary movement by the war, Maclean was able to develop a clear internationalist understanding of the conflict. Sherry points out that "like Lenin", Maclean saw the conflict as "a struggle between the great powers for land and markets." In Maclean's words,

"Plunderers versus plunderers with the workers as pawns. It is out business as socialists to develop class patriotism, refusing to murder one another for a sordid world capitalism."

However Sherry also explains, that despite Maclean's brilliance, and the loyalty he had from thousands of workers, he lacked the political organisation that Lenin had. At various times the class struggle in Glasgow ebbed and flowed during the war. At certain times the movement reached near revolutionary peaks, but the government, through repression and the use of the union bureaucracy were able to damp down the militancy.

Though Maclean understood that the movement needed to link political and economic struggles, too often the unions were able to divert the strikes down sectional paths. This was not to deny though the significance of the struggle. Both during the war, when Glasgow ignited mass strike waves that spread through British factories, and afterwards when during 1919 Glasgow was in such upheaval that tanks and warships were deployed to prevent revolution. The sections of this book that give a taste of these struggles are nothing short of inspiring.

This weakness of Maclean's; his lack of an understanding of the need to build political organisation was bought into sharp relief when he refused to join the fledgling British Communist Party. Sherry argues that this was very much to with he hostility to some individuals who did join, rather than an inherent (and early) belief in the need for Scottish independence. Maclean was a revolutionary internationalist, who's life work was dedicated to the overthrow of capitalism. At a time when the Scottish are discussing the future of the union, Maclean's belief in the revolutionary potential of ordinary workers has never been so important. As Dave Sherry concludes in his new introduction, "the break up of the UK would be a small victory for the world working class and, as John Maclean argued 90 years ago, that is something to fight for."