Baku: Congress of the Peoples of the East

My recent reading of The Oil Road reminded me of the fascinating radical history of the city of Baku. Formally part of Russia and now in Azerbaijan the city had at the beginning of the 20th century been a hot bed of working class action. Central to both the 1905 and 1917 revolutions Baku was one of the most important cities for the new Soviet republic.

Central to the programme of the Bolsheviks who led the Russian Revolution was the idea of self-determination. Right from the earliest days after the Revolution different parts of the old Russian Empire were given the right to determine their own future. This contrasted very much with the policies of the previous regimes as well as the later policies of the Stalinism.

However the Bolsheviks fought the revolution with an internationalist mindset. Lenin and the other leaders understood that an isolated Russian Revolution would face starvation and defeat. They hoped for similar revolutions to break out across the world, not least in Germany. But they also understood there was enormous potential for solidarity and revolutionary upheaval in "the East". The Congress of the Peoples of the East then was called in 1920. This was a conscious attempt by the revolutionary leadership to spread the ideas of Communism and Bolshevism through countries like Turkey, Persia, Armenia, China and elsewhere. Hundreds of delegates came from all over the Middle East and further afield. They met, listened to and debated speeches from leading Russian revolutionaries like Karl Radek and Zinoviev. They also heard from representatives of new, or growing revolutionary organisations in Europe. There was a representative from France (Rosmer), Britain and even the Dutch Communist Party.

This stenographic report is not perfect. In parts it is incomplete - I'd dearly love to read the speeches and representations from the Jewish organisations that were present as well as other speeches by the small number of women delegates. The transcripts are also limited to the main speeches, rather than the smaller meetings, caucuses and fringe events. This means much of what we read a fairly long, set piece speeches, rather than shorter discussions. This doesn't mean that they are all rhetoric. There are fascinating references to ongoing struggles in countries like Turkey and debates about the way forward.

One of the key questions for the Congress was the attitude of revolutionary socialists to what would now be called movements of national liberation. Then there were mass movements growing and developing against the colonialism of Britain and France as well as the growing role of American imperialism. For some at the conference the key question was national liberation and the development of an independent national bourgeois before the socialist revolution. This mimics debates within the Russian socialist movement itself, and the Russian delegates argue hard for the idea of "permanent revolution"; revolution that takes the struggle for national liberation immediately over into the struggle socialism.

There is much in this book, and the translation as well as the supporting notes from the British Trotskyist Brian Pearce are indispensable. Not least because names of places and individuals are often now unknown to us. Those who have read The Oil Road will find here-in the story of the Bolshevik Commissioners who used to be buried in Baku, after their murder by British forces. The Congress itself ceremonially laid their bodies to rest in a square that was only recently destroyed.

Of interest to contemporary debates around the role of women in the Arab Revolutions are the two contributions in this book from women. Comrade Nadzhiya begins her speech with this statement:

"The women's movement beginning in the East must not be looked at from the standpoint of those frivolous feminists who are content to see woman's place in social life as that of a delicate plant or an elegant doll. This movement must be seen as a serious and necessary consequence of the revolutionary movement which is taking place throughout the world. The women of the East are not merely fighting for the right to walk in the street without wearing the chadra, as many people suppose. For the women of the East, with their high moral ideals, the question of the chadra, it can be said, is of the least importance. If the women who form half of every community are opposed to the men and do not have the same rights as they have, then it is obviously impossible for society to progress: the backwardness of Eastern societies is irrefutable proof of this." 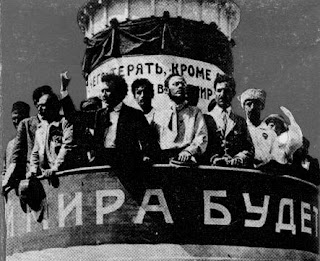 Running through the Congress, even amongst those who are not communists and hold out different visions of how to achieve freedom is the enormous respect for the Bolsheviks and the political authority that representatives of the revolution have. This shouldn't be a surprise. The world was experiencing enormous revolts and the Russian Revolution was as yet the only successful revolution. Delegates at the Congress had every reason to believe it wouldn't be the last. They were to be disappointed. Despite the Congress electing a committee to produce publications and organise future events, this was the only meeting of the revolutionary representatives of the People of the East. With the rise of Stalin attitudes towards liberation movements and minorities in the East took an entirely different route, which possibly explains why these reports did not become public until the 1970s when Trotskyists translated and published them.


Today the reports are far more than a historical curiosity. They are a wonderful insight to a political moment, when the world was being turned upside down. They demonstrate the attitude of the Bolshevik movement to different nationalities and movements and there is much to learn. They are also full to the brim of the excitement and enthusiasm of men and women believing their time has come. The transcripts tell us every time the speeches are interrupted for cheering, the singing of the Internationale, or even someone at the back shouting out "speak up". If you want to know the immediate impact of the Russian Revolution on people around the world, you could do far worse than read this.

The transcipts can be read on the Marxist Internet Archive here though the book version is published by New Park and can be obtained via socialist Bookshops like Bookmarks.

Useful article on the Bolsheviks and Islam by Dave Crouch here.

Marriot and Minio-Paluello - The Oil Road
Posted by Resolute Reader at 6:41 pm

For a more complete transcript of the Baku Congress, see "To See the Dawn" (Pathfinder 1993), a volume in John Riddell's indispensible documentary history of the Comintern in Lenin's time.

I agree that John Riddell's version is a more complete account, but the notes by Brian Pearce means that it would be worth hunting down a copy of this version too!