Sven Lindqvist - 'Exterminate All The Brutes' 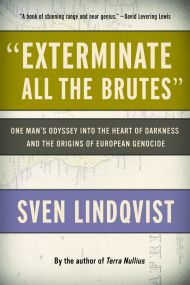 The title of Sven Lindqvist's short book comes from Joseph Conrad's Heart of Darkness. It is the supposed solution to the task of the European countries in Africa and neatly sums up the violence at the core of colonial aspiration and imperialist aggression.

Part travelogue, part fiction and explicitly "not a contribution to historical research", Lindqvist's book is an account of the way that European colonialism and then more recently imperialism has subjugated the populations of other countries. His analysis differs from a Marxist one. He doesn't argue that the problem lies within a system of competing blocks of capital. But his story is no less painful and doesn't hide from pointing the fingers of blame and governments and individuals who were prepared to commit genocide in the interest of their nation state.

Conrad's writing of Heart of Darkness forms a fixed point for Lindqvist's account. He discusses the writings and activities that took place around the time, that would inform Conrad's account of massacre in Africa. Then he looks at the rise of racism and how Darwin's evolutionary theory was used to justify genocide. Lindqvist describes how one member of the British scientific establishment saw the future:

"Africa will be shared between England and France... Under European rule, the Africans will dig the ditches and water the deserts. It will be hard work and the Africans themselves will probably become extinct. 'We must learn to look at this result with composure. It illustrates the beneficent law of nature, that the weak must be devoured by the strong.'"

Such scientific distortions were all to common in the 19th century. Their influence on colonialism and slavery led to the deaths of millions and the pillage of entire continents. But Lindqvist is keen to explore the links between this historical past and more recent genocides such as the Holocaust. Lindqvist argues, that the Holocaust, in the sense of a colonial massacre of millions is far from unique. Indeed he suggests that we want to see the Holocaust as a unique act, so that we can avoid the reality of our own national history a "most comforting thought" he says. Lindqvist points out that

"Hitler.... and all the other Western people in his childhood breathed was soaked in the conviction that imperialism is a biologically necessary process, which, according to the laws of nature, leads to the inevitable destruction of the lower races. It was a conviction which had already cost millions of human lives before Hitler provided his highly personal application."

Unfortunately I think this analysis is only partially correct. The Holocaust was unique because it was the only industrially organised genocide that lies rooted in the rise of Fascism. That said, it has links to the past and  as Lindqvist suggests other Imperial powers are certainly not innocent. Fascism is a particular aberration of capitalism, but it is more than simply a more violent version.

Once again Lindqvist exposes the bloody history of colonialism and imperialism. His book is unusual in its style, but its format doesn't detract from its content. There are few positives in Lidqvist accounts. He doesn't mention those people who stood up against slavery, colonialism, racism and genocide, often at great cost to themselves. Nonetheless this is a useful demolition of those who argue that Empire and colonialism was beneficial to the majority of the population.


Newsinger - The Blood Never Dried: A People's History of the British Empire
Gott - Britain's Empire: Resistance, Repression and Revolt
Pakenham - The Scramble for Africa
Posted by Resolute Reader at 2:39 pm