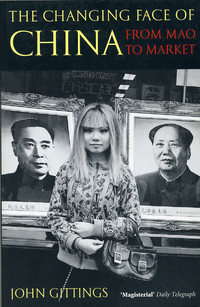 Barely a day goes by without some newspaper including an article on China. China, it is said, is likely to be the next superpower, or undergo an enormous economic crash, or haul the world out of recession. But few of the columnists writing these articles have any great depth of understanding of China's history or economy.

One of the writers who does is John Gittings. For twenty years he was The Guardian's East Asia editor and his first hand knowledge of the people, places and history of China is unparallelled. Subtitled, "From Mao to Market", this 2005 book covers modern Chinese history and attempts to explain how China is now one of the foremost world economies when, only a few decades back the country was effectively isolated from the world economy, while its leaders preached socialism. The book is a useful account of modern Chinese history. At times it is overwhelming in its detail, and sometimes it has a non-linear approach to the history, so following events can be difficult. Nonetheless it is a worthwhile read if only for the sympathetic and honest account of the Chinese people.

Gittings argues that before the 1980s China was a socialist state. It is not clear what he means by socialist in this context. Marxists in the tradition I'm from have argued that China, alongside Russia and parts of Eastern Europe, was a State Capitalist economy, one were a centralised bureaucracy directed an economy, which had very little to do with a democratic socialist tradition. Nonetheless over the decades this broke down with various attempts to reform the economy. In this context, reform means open up to more capitalist dynamics, but as Gittings' points out, this was often down in the "framework of socialist thinking which always put 'politics first'."

Yet this politics had very little to do with improving the lot of ordinary people, and everything to do with protecting the interest of the more powerful. That's not to say that the state didn't improve the lives of people at various times. Gittings shows how the ability of the state to provide health care, basic services and food for people was far greater than previously. He also shows however, how disastrous political choices often led to hunger, chaos and political crisis. By 1989 though, Gittings argues, "the scene .... with agriculture effectively privatised and the profit now accepted as the dominant force throughout the economy was unimaginable at the start of the decade." Oddly, Gittings follows this up with a quote from Trotsky, who was one of the few revolutionaries in the 1930s who argued that China had taken the wrong road and was not a bastion of socialism. Gittings' confounds this by badly misquoting Marx, "from each according to his ability to each according to his work." "Need" is the correct final word from this quote.

One of the problems with Gittings' understanding of what socialism is, is that he can wedge almost anything into the definition. In fact this is precisely what the leaders of China, in the past and more recent times have also done. Here's a fascinating quote from Deng Xiaoping justifying "reforms" that were actually impoverishing millions:

"During the 'Cultural Revolution' there was a view that poor Communism was preferable to rich capitalism... The main task of socialism is to develop the productive forces, steadily improve the life of the people and keep increasing the material wealth of the society. Therefore, there can be no Communism with pauperism, or socialism with pauperism. So to get rich is no sin."

Since the existence of "rich" people, inevitably means the persistance of poor people, Deng here is trying to have his cake and eat it. However Gittings points out that despite rhetorical appeals to "socialism" or "the party" over time, such arguments become less important and a more general appeal to the concept of "the nation" is enough. In the 1990s, change could be "justified almost entirely in terms of the material interest of the Chinese people and of the global interests of the Chinese state."

This book is at its best when describing the lives of Chinese people and the enormous changes that have taken place to them and their families over the course of the last century. In 1980, Gittings points out, over 80 per cent of the population still depended on the land. But "twenty years later, an accelerating process of urbanization had transformed the relationship between town and countryside: 31 per cent of the population were urban dwellers, the number of towns rose from some 3,500 to around 20,000."

Alongside this enormous urbanisation has been the growth of unemployment and wage labour in factories. While this book is not recent enough to include material on strikes and "events" at factories like Apples, it does include a number of accounts of strikes, as well as some depressing statistics on low pay, high levels of prostitution and the crisis of HIV/AIDS in the country. The flip side of China's rush to become a "quasi capitalist" system, Gittings puts it, is the destruction of peoples' lives in the rush to make profits. Again though, Gittings' argues that this is less to do with capitalism and more to do with "the loosening of Party authority together with the spread of corruption" which "encouraged new destructive forces in society".

At the heart of the book is an account of the 1989 repression of the protesters in Tiananmen Square. This was the culmination of many years of frustration and anger at the upper echelons of the Communist Party. The CCP had been silencing dissent and reacted to Tiananmen Square with enormous violence. While the student pro-democracy movements were silenced, the 1989 events certainly helped shape policy since. Post-Tiananmen, struggles have increased. Gittings quotes figures that show that labour disputes recorded by the Ministry of Labour went from 8,150 in 1992 to 120,000 in 1999. In the 21st century this has only increased as protests grow against unemployment, low wages as well as environmental issues.

Many years back, Leon Trotsky asked, Wither China. It is still a pertinent question. Gittings' book is reportage and doesn't seek to offer an alternative to the headlong rush towards capitalism. But socialists should neither look back to China's past as some sort of great socialist paradise (though Gittings' does appear to have some nostalgia for a time when there was less unemployment). Rather we should understand that simmering away in the belly of China is an enormous working class and peasantry who's anger at what is happening to their lives is only matched by their potential to shape society in their own interests. Those who use the language of socialism to increase exploitation can only have themselves to blame when the people fight back.