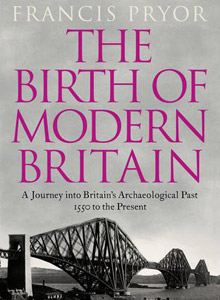 Probably to the annoyance of some of my fellow socialists I've championed the work of Francis Pryor rather alot. His works of popular history have certainly made many contemporary archaeological ideas accessible to the general population and together with the Time Team program, Pryor has been part of a renewed interest in the UK towards the history of Britain.

This book is the fourth in Pryor's archaeological history of Great Britain. Pryor's personal expertise is in the ancient past, and I certainly found Britain BC the volume that deals, effectively with the history of Britain prior to the Roman invasion his most interesting. Unfortunately, the further Pryor moves from his era of expertise, the more I have found that his work disappoints. In particular, this work on "recent archaeology" misses the mark completely.

Because Pryor attempts to look at the wider picture when it comes to archaeology, his work can be particularly useful for those trying to understand the way that historical change has taken place. Rather than concentration on specific sites or archaeological finds, he tries to locate monuments or old buildings within a wider landscape and history. This is most effective when he looks at groupings of monuments in wider contexts. Most obviously, Pryor's explanation of the location of Stonehenge within a wider "ceremonial landscape" that has a history extending from long before the monument was built to centuries afterwards, means that we think about Stonehenge in a wider historical way, rather than as a building from a particular point in time.

This approach should work well when Pryor considers the modern world. After all the growth of cities, the development of modern agriculture, the invention of new techniques and technologies are, as we approach modern times, very much tide up in wider questions. The landscape, the movement of people, the developing forces of production and interests of particular classes within society. The sections in here on the birth of modern agriculture, the development of towns and cities, the archaeology of the first factories and mills to say nothing of transport networks like canals, motorways and railways would seem to fit well with this approach.

Unfortunately, Pryor's approach breaks down. In part his hatred of the word "revolution" is a problem here. Pryor doesn't like revolution. This is not because he isn't a progressive. Far from it. In this book he complains for instance about short-sited immigration controls from various British governments that scapegoat people in the interest of short-term political gain.

Rather Pryor dislikes revolution, because he believes that change is effectively evolutionary. In some senses of course he is right. Human society, history and technology does change through a process of evolution. Pryor argues for instance that the industrial revolution wasn't a revolution because it was based on the gradual development over centuries, of industrial processes, science and technology.

Yet what Pryor misunderstands is that these processes develop within wider society. The enormous social upheavels that took place in the 17th cenutry in England that led to a king having his head cut off, are ones that enabled those individuals in society geared towards developing society based on the accumulation of wealth to become the dominant ruling class. This was at the expenes of the old, feudal order. These changes are in part what makes the agriculatural revoution possible. Pryor's emphasis on evolution means that he misunderstands the enormous changes taking place, emphasising the continuity, rather than the change.

This however is only part of what makes this final volume so weak. The real problem here is the enormous mis-mash of ideas and places. Pryor deliberately avoids a narrative approach, so his history jumps back and forth in time. This isn't necessarily a problem, but the reader is left bewildered by all the different ideas. One moment Pryor is discussing railways, another he is looking at mining then pottery. This means he emphasises very much the particular changes taking place around a specific industry and those who work it, but fails to develop how this is linked to the wider developments in society.

Often the most illuminating parts of Pryor's books are were he draws on personal experience to help the reader understand an archaeological dig or a particular monument. In this book though, the reader is drowned in random, personal anecdotes. He tells us how he gets out of the car to photograph a particular view or enjoys an encounter with an attractive young woman who recognises him from television. But these rarely serve to illuminate the history he is recounting and often seem a bit tacked on. It is almost like Pryor sees himself as the key to understanding British history, rather than the evidence he is presenting us with.

Unfortunately this is a disappointing book that is best avoided, though I would suggest readers should certainly pick up other books by Pryor, particularly Britain BC and his history of the British Landscape.