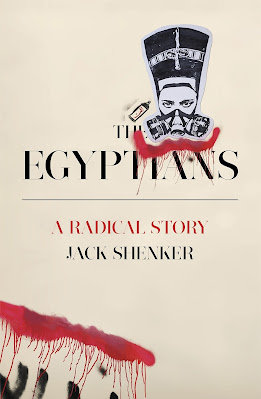 In early 2011 millions of people around the world were captivated by the Egyptian Revolution. I remember rushing out of meetings to the pub so we could watch the latest news from Cairo - had Mubarak gone or not? For the first time, mainstream and social media gave millions a ring side seat in a revolution. The Egyptian Revolution was part of the wider rebellions often labelled as the "Arab Spring". Rightly, Jack Shenker argues that the term is part of sanitising the revolutions of their radical content, remoulding them as pro-Western struggles whose participants were more interested in creating the sort of neoliberal society favourable to the Whitehouse and the European Union.

Shenker's book shows that the reality was very different. The Egyptian Revolution was the most thoroughgoing of the Middle Eastern risings and it was characterised very much by a desire to build a radically different sort of society. The moment when the Egyptian military finally decided that Mubarak had to go coincided with a massive explosion of workers' strikes. Once the working class began to move, the situation threatened far deeper changes than simply toppling a few politicians and military leaders.

Search for images of the Egyptian Revolution today and you will almost certainly find pictures of the massive crowds that occupied Tahrir Square. This occupation became symbolic of the revolution itself and inspired countless attempts to mimic it around the world. The idea that a free space where alternative ideas and organisation could flourish with existing society was incredibly attractive and dovetailed with the ideas of a fair few radical thinkers. It was if by sheer weight of the imagination, politicians and states could be overthrown. The scale of the occupation, the regime's attack on Tahrir, the fight by its participants to defend the space nonetheless did give the space an important place in the revolution. But we must be wary of placing to much utopian hope on such occupations. As Shenker cautions:

there is a danger in projecting too much of the revolution on to this single square, and thus confining the revolution in space and time… Focusing too closely on Tahrir ignores a panoply of revolutionary  struggles, and it leaves the factories and farms and schools and alleyways and minds in which revolution is raging dangling far off the edge of the page, alongside the dozens of other city squares across Egypt where battles were won and occupations mounted.

More recent commentators on the Sudanese revolution have, in my opinion, fallen into a similar trap to those who abstracted Tahrir from wider revolutionary context. But Shenker does celebrate what happened in that crowded square and how Tahrir symbolised wider aspirations:

Tahrir did not come from nowhere. In fact the site was the location of numerous smaller protests, many of which had been brutally suppressed by the Egyptian state. Shenker describes the deep roots of discontent in Egypt; struggles by local communities over their environment, their housing and their agriculture; small, brave and important democracy protest movements which fed the atmosphere that would eventually explode in 2011 and the economic struggles of workers and peasants. Shenker emphasises that "the first strand, and arguably the most critical, was the fight-back by workers against the structural violence and redistribution from poor to rich that accompanied neoliberalism." He explains:

By the twenty-first century, economic liberalisation under the tutelage of the international financial institutions had eroded that alliance, and workers increasingly saw the state itself as a the facilitator of colonialism of a different order. In the final years of Mubarak's reign, workers'; embroiled virtually every category of workplace you can think of in confrontation. By 2011, they would play a critical role in toppling the president altogether.

The role of workers in the Egyptian revolution is a neglected part of many accounts of 2011. Thankfully this is rectified in Shenker's book, where some of the most inspiring passages describe workplaces were workers are in control and have kicked out corrupt managers, or have won massive concessions. Likewise some of the most tragic are the way that the post-Mubarak regime and the Muslim Brotherhood quickly moved to demobilise the strikes and workers' action.

Shenker himself was close to much of the action, reporting from Egypt over many years and being at the heart of events during key moments before and after the revolution. His breathless excitement comes through as the January 25th protests are suddenly so much more than the small democracy protests he's witnessed over the years. At the other extreme we feel his terror as he is trapped in a police van, possibly heading for a beating or worse and his desperation as the people's gains are crushed by Sisi's counter-revolution. It is brilliant writing, exhilarating, personal but most of all giving ordinary Egyptians - from farmers and labourers to revolutionary socialists and feminist activists - their voice. There are also some joyous (and fascinating) accounts of talks with bosses and politicians who've been shrunk by the revolution.

It is also a remarkable work of historical research. Shenker shows how Egypt's history has been shaped by colonial and imperialist forces right till the present day. The neoliberalism that Mubarak and his predecessors imposed arising out of the position that Egypt has as a regional power and international state, especially during and immediately after the Cold War.

Because Shenker takes the long view, which sees the Egyptian Revolution not as a sudden outburst of anger, but as a working class reaction to deep seated inequalities and oppression, it is hard not to conclude that the Egyptian Revolution will rise again in the future. While we must be wary of historical parallels, perhaps 2011 was Egypt's 1905? At the moment though, the counter-revolution has triumphed and tens of thousands of activists remain in jail.

But at some point the contradictions of Egyptian society will bring people out onto the streets again. A renewal of the revolution will mean overcoming many real obstacles, but the objective circumstances will force people into conflict with the Egyptian state. As Shenker concludes:

Ultimately, Mubarak Country is built on an assumption of fear and dependency; pre-revolution and now, it relies not on a stable system of governance, but on the perpetuation of mental shackles, on a belief that nothing more is possible. The problem with mental shackles is that poverty and exclusion tend to rust them, and they are hard to maintain when new generations, new minds, keep bursting on to the scene. Perhaps this is why Sisi... has been particularly determined to oppress the very youngest... These are not the actions of a state that is confident in its own survival; they are the actions of a state which knows its authority has been irreparably damaged, and that Revolution Country clings on amid the fissures.

Jack Shenker's book is a masterful account of a particular revolution, an insight into the revolutionary process itself. It reminds us that workers' revolution is not something of the past, but a reality for capitalism today. Reading this book I was reminded of the excitement of 2011, the sense that the world was changing and how we all got a brief glimpse of a different social order. In that sense The Egyptians is far more than a historical account, its a lesson for radicals everywhere.

Posted by Resolute Reader at 6:36 pm