Darcus Howe - From Bobby to Babylon: Blacks & the British Police 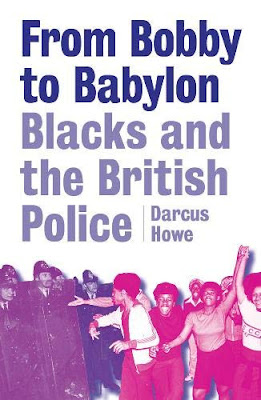 Darcus Howe was one of the most important radical anti-racist activists in post-war Britain. As part of the collective that produced Race Today which he edited, he was a significant figure in developing and organising radical, anti-racist black movements. He was part of the "Mangrove Nine" a group of activists who were arrested for protesting against the repeated police raids and harassment of the Mangrove Caribbean restaurant in West London. To my generation he was perhaps best known as a broadcaster who regularly put the establishment, the police and the media in the spotlight for racism.

Many of the issues that Howe campaigned over have returned to the spotlight in recent years as a result of Black Lives Matter. This short book is a classic work produced by Race Today in 1988 in the aftermath of the uprisings that shook Britain in 1981. Those "inner city" rebellions against Thatcher's policies and police racism shook the country and were almost universally condemned. Howe shows how they arose out of systematic racism, poverty, unemployment and rage against the police.

Howe argues that the British government had managed to create an apparent consensus of policing, the British bobby that was fair and solved crime - but this was not the case, the police were systematically racist and used their power and violence to oppress working class people in general and black people in particular. In the 1970s and 1980s a new generation of young black people grew up who were not migrants and were not thinking of returning home, but rather saw Britain as home - and they were not prepared to stand for this treatment. As Howe says, "the development of young blacks inside British capitalism rendered them incompatible with the social arrangements they had inherited".

The rebellions of 1981 saw "a section of the British working class, distinguishable by the colour of our skins, had declared open rebellion against the British state. And the British state reacted in the same manner as it had done to generations of Irish, Scottish, Welsh and English workers".

The great strength of Howe's work is that he places state (and police) racism and violence in the context of class rule and class struggle. This means he sees, and argues for, unity between black and white workers. Powerful statistics and examples show how the police powers were used systematically against black people, and in a way that encouraged division between workers through racism.

Howe also puts a personal twist on these stories. There's an account of the racism he experienced from a police officer who followed him and his friend as they shopped for shoes in central London, an experience that leads to Howe's arrest and then release. There's also an account of how the Notting Hill Carnival sees the police ramp up tension and hostility until they are able to attack the carnival and blame black people for the violence. The way that the media and police colluded in portraying black immigrants as criminals, drunks and prostitutes is quite shocking, and there are so many parallels with the way that racist myths are used today against Muslims.

This short book has been recently republished by Bookmarks, and includes a couple of extra essays by Howe and two excellent framing articles by socialist Brian Richardson and the campaigning lawyer Gareth Pierce. As new generations fight police violence and racism, and challenge a racism state, this short book is a brilliant call to arms that pays reading. Sadly Darcus Howe died in 2017 but he his words continue to resonant. I highly recommend this book.

Richardson (ed) - Say It Loud! Marxism and the Fight Against Racism
Fryer - Staying Power: The History of Black People in Britain
Aspden - The Hounding of David Oluwale
Hirsch - In the Shadow of Enoch Powell

Posted by Resolute Reader at 7:42 pm