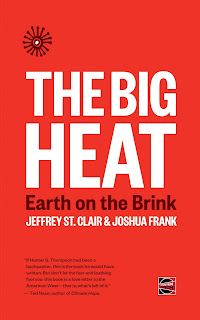 This excellent collection of essays by Jeffrey St. Clair and Joshua Frank brings together beautiful travelogues infused with ecological science, polemical critiques of the big businesses and politicians destroying the planet and a celebration of those that fight to protect the environment. Almost all of the essays focus on the United States, though several of them have a wider remit. A chapter on the human and environmental devastation caused by the US' repeated wars in the Middle East and the impact of industrial fishing are testament to the way that imperialism drives destruction far from national borders.

I initially chose the book because I had hoped to visit Montana in the United States which is the subject of several chapters. Sadly, that voyage is unlikely to happen now, but the opening chapters made me realise that this would have been the perfect read for visiting that part of the world. These combine wonderful portraits of the flora and fauna, particularly the wolves and buffalo of Yellowstone, with devastating critiques of the impact of global warming and government policy. Here we see writ large the limitations of a strategy to protect biodiversity that is reliant on creating islands (even very large ones) of nature within a wider landscape.

Only a capitalist system could imagine the way to save animals like bison that stray out of their designated area (who knew bison couldn’t read signs) from hunting would be to sell the herd to the biggest cattle market in the region. As one campaigner said, "how did the promise of wild buffalo in Yellowstone National Park for the enjoyment of future generations become ranched buffalo fenced behind PRIVATE, NO TRESPASSING signs?". The problems are made worse because of those politicians for whom permission to allow the hunting of wild animals is based on the number of local swing voters.

One theme that runs through the essays is the close link between multinationals and politicians. Whether its oil companies in the Mexican Gulf or nuclear power corporations, having several friendly politicians can help smooth the wheels of environmental destruction. Readers who are more used to seeing Obama praised to the high heavens might find themselves surprised at the extent of anger directed at his Presidency by these authors. In a chapter that has a great deal of resonance during the current Coronavirus epidemic "How Obama Defanged the Environmental Protection Agency", the authors complain about his reaction to the Deepwater Horizon disaster:


Even though it was the largest oil spill the US had experienced in decades Obama prevented the agency in charge of overseeing the country's environmental regulations from being involved in any meaningful way. Could it have been that Obama surrendered to BP because he had two years earlier accepted more campaign cash from the company- a mix of cash from employees and political action committees - than any politician over the last two years? Not many in the environmental community were asking."

The final sentence hints at another theme. The mainstream environmental movement, particularly the NGOs, is culpable in the destruction itself. This is not that the authors argue the NGOs and charities wilfully destroy the environment. Rather that their lobbying and well-funded, media savvy campaigns are part of a movement that operates by aiming for concessions within the system. They're happy to take a few green offerings even if they have to agree to let much else go by.

The last section of the book celebrates those struggling to protect the environments. That's not to say that they're ignored elsewhere, many of the essays, whether it’s those about bison in Yellowstone, or mid-west towns facing cancer clusters or water pollution, emphasis the role of local activists organising - sometimes in difficult circumstances. The shadow of Karen Silkwood hangs heavy over the chapters that look at the sordid history of nuclear power in the United States.

So the last few chapters focus on several activists in groups like Earth First! that have fought the multinationals, the US government and institutions like the FBI. Here's another dirty tale - the framing and violence used against those who dare to protect ancient forest from logging or protest nuclear power. The authors contrast these activists with the limited successes of the big NGO environmental movement and I'm glad they do - there is at least some hope here. But because these are the only options offered to saving the planet it felt like the book was concluding that only such action could save the environment. Commenting on the protests that exploded when Trump was elected the authors are understandably a bit cynical when they complain that those marches didn't achieve anything concrete. But they continue:

We certainly do need to go beyond NGO stamped marches. But I think this approach is unhelpful. If we're to build a movement to defeat the powerful multinationals, corrupt politicians and inappropriate capitalist solutions to ecological disaster, we'll need the type of movement that can challenge capital through mass movements. I don't think we will build that movement by dismissing those demonstrating, possibly for the first time, as not doing enough. We'll need to show how we need far more than just marches. We'll need the sort of movements that can shut down big oil, big timber, big nuclear power - through mass protests and strikes as well as direct action. But we shouldn't counter-pose the strategies. A living, breathing mass movement will involve all sorts of actions interacting and giving each other energy. Mass marches in particular can inspire further, radical action. That movement won't start were we'd like it to - our job is to develop and shape it. And that is partly what this book will do.

Because despite my strategic disagreements with its epilogue, I have no hesitation in recommending this collection of insightful and inspiring essays. I hope it will inspire activists to block roads, protest and strikes - and ultimately overthrow the system that sees nature as a commodity to be bought and sold for profit.

Klein - This Changes Everything: Capitalism vs the Climate
Wilcox - Shamrocks and Oil Slicks: A People's Uprising Against Shell Oil in County Mayo, Ireland
Extinction Rebellion - This is Not a Drill
Everard - Breathing Space: The Natural and Unnatural History of Air
Commoner - The Closing Circle
Carson - Silent Spring
Angus - Facing the Anthropocene
Posted by Resolute Reader at 8:13 pm

Sounds like an excellent collection. With thanks for the recommendation. I hope you don't mind if I provide a recommendation also re: the environment. David Wallace-Wells' The Uninhabitable Earth is a deep dive into how climate change will affect human life - taking a holistic view to it - at various markers of warming, such as 2 degrees, 4, and even the nightmarish 8. It's meticulously documented, syncretizes a lot of otherwise disparate and separated information into one place, and written in prose as beautiful as what it describes is terrifying.